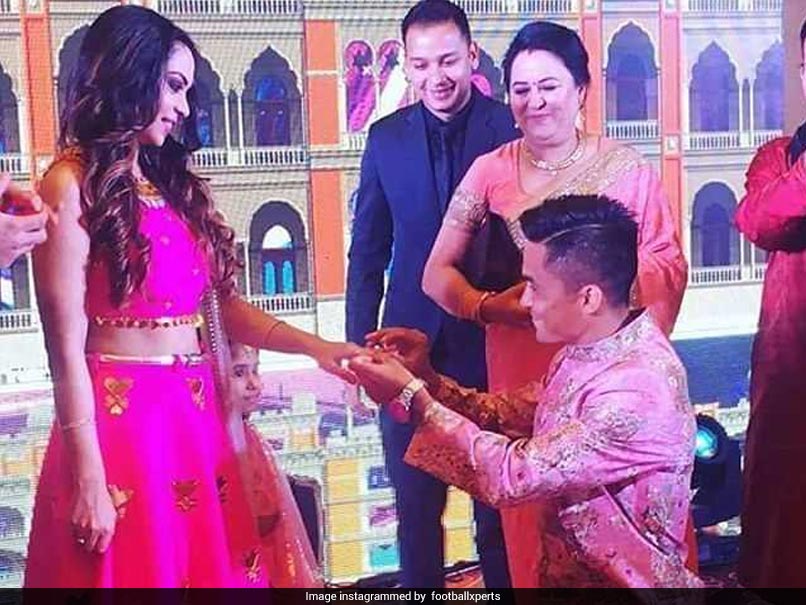 Indian football team captain Sunil Chhetri on Monday tied the knot with long-time girlfriend Sonam Bhattacharya, daughter of Mohun Bagan legend Subrata Bhattacharya, at a grand wedding ceremony on Monday. The poster boy of Indian football was seen in a traditional Nepali attire topped with a 'topi' (hat) as he made an entry riding a horse in the evening. Later, he was seen in traditional Bengali attire as the wedding followed the customs of both the bride and groom. West Bengal Chief Minister Mamata Banerjee was among the firsts to bless the newly-weds as a host of celebrities from the world of politics, cinema, football and other sports were seen at the wedding.

The guests included Chuni Goswami, Gourmangi Singh, Rennedy Singh and Robin Singh among others as the couple were seen posing for photographs after the wedding.

The couple had exchanged rings last month, soon after which the 33-year-old resumed on-field action for Bengaluru FC in the Indian Super League.

Chhetri, however, would not be able to take a break immediately after the wedding as he will be off to Guwahati for their away match against NorthEast United FC on December 8.

Chhetri scored in Bengaluru's 2-0 win over Mumbai City in their ISL opener on November 19. Bengaluru recently faced a defeat at the hands of FC Goa 3-4.

The couple's sangeet ceremony was held in Gurgaon last month. Chhetri's wife Sonam is a business management graduate from Scotland.

Comments
Topics mentioned in this article
India Football Team Sunil Chhetri Football
Get the latest updates on IPL 2021, IPL Points Table , IPL Schedule 2021 , live score . Like us on Facebook or follow us on Twitter for more sports updates. You can also download the NDTV Cricket app for Android or iOS.