La Liga was informed by the Spanish Football Federation that it would not support hosting January's league game between Girona and Barcelona in Miami. 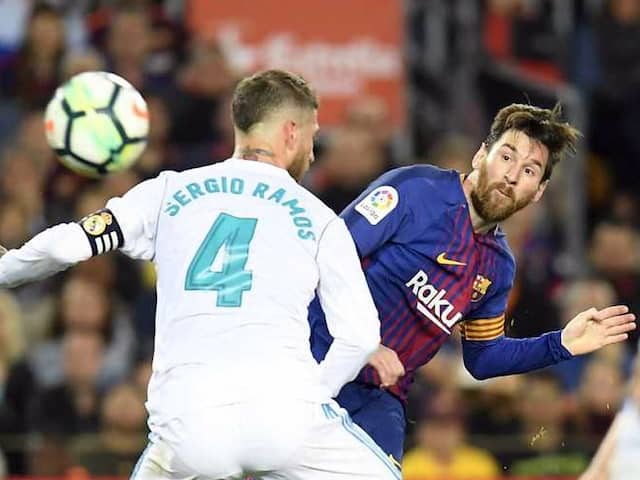 "The world is our playing field," says an inscription on the wall at La Liga's headquarters in Madrid, written in Spanish: "El mundo es nuestro campo de juego." It seems an apt motif, as Spanish football confronts questions about the very essence of its national game, and where it should call home. "If we want to remain competitive, we have to open ourselves to the world," La Liga's director of international development, Oscar Mayo, told AFP. But others are still to be convinced.

La Liga was informed by the Spanish Football Federation (RFEF) on Friday that it would not support hosting January's league game between Girona and Barcelona in Miami. The two sides play the reverse fixture at Camp Nou on Sunday.

At the board level, both clubs have put their names to La Liga's request but key players retain doubts.

Even if the RFEF changed its mind, the plan needs approval from the US Soccer Federation, as well as UEFA and CONCACAF -- the governing bodies in charge of European and North American football respectively -- and the Spanish sport council.

FIFA president Gianni Infantino and Real Madrid coach Julen Lopetegui have expressed reservations while Barcelona's Ernesto Valverde appears a reluctant advocate. "It is our intention, but there is a long way to go," he said.

La Liga are not deterred. Mayo said there were two red lines that would not be crossed: "It will never be more than one match (in a season)" and "It will not be the Clasico".

La Liga has a 15-year agreement with Relevent Sports to promote football in the US and Canada. Some speculate that if the move is blocked this season it would only amount to a postponement, not a cancellation.

"It's like when we changed kick-off times," Mayo said.

"Whenever you are innovative and make a sudden change it is difficult to adapt, but we also know that as soon as we do, as time passes, we will all agree that it was a wise decision."

The partnership with Relevent was one of two deals struck last summer which have excited La Liga.

The other was a contract secured with Facebook to begin broadcasting matches free and live in eight countries in South Asia, including to India's population of 1.3 billion.

Lurking behind both initiatives is one central goal: to catch up with and then surpass the English Premier League.

"We have the ambition to overcome the Premier League. These deals are the two good new stories for us this summer," Mayo said.

In terms of television rights, La Liga will collect at least 1.1 billion euros ($1.3 billion) per year from Spanish broadcast companies between 2019 and 2022, plus 896 million euros from abroad.

These figures still pale in comparison to the English Premier League, which expects to pocket at least 1.6 billion euros per year from its national market alone over the same period.

For La Liga, the difference has to be made up overseas. "In the next four or five years, we should be at least at the same level," predicted Mayo.

The shift towards Asia has already begun. Last season, La Liga's showpiece match between Barcelona and Real Madrid at the Santiago Bernabeu kicked off at 13:00, aimed at luring fans in Tokyo, Beijing and Delhi.

But a glance at Barca's social media figures shows the challenge ahead.

The club's English-language Twitter account has millions of followers, streets ahead of its Indonesian version with 378,000 and Japanese with 235,000, even after Andres Iniesta's groundbreaking move to Vissel Kobe last summer.

La Liga believes interest from abroad should be considered not a threat but an opportunity, and a privilege.

"For all Spanish football -- presidents, managers, fans, players -- having a product that is the best league in the world and that is followed all over the world should make us feel very proud," Mayo said.

"Proud that a market like the US is so interested in taking one game a year, for example. Obviously we have to do it very carefully, take into account the fans, and the first years will not be easy.