Real Madrid have yet to sign a direct replacement for the Portuguese superstar Cristiano Ronaldo, who switched to Juventus in July. 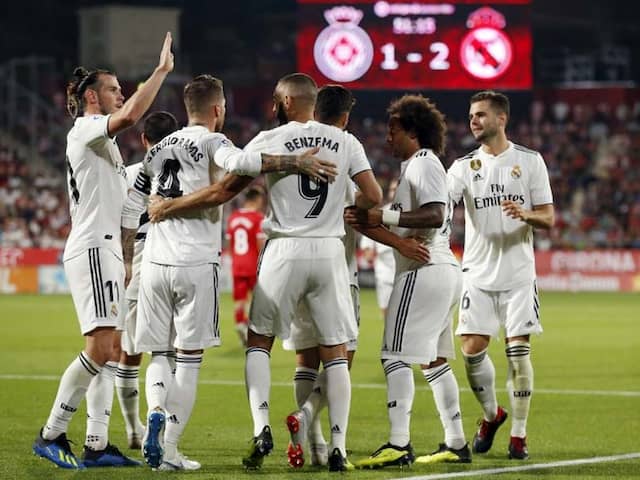 Real Madrid coach Julen Lopetegui insisted after a come from behind 4-1 win at Girona that a "keep calm under pressure" attitude would deliver the goals previously scored by the prolific but now departed Cristiano Ronaldo. Seeking their second win of the new La Liga season the European champions fell behind before a brace from Karim Benzema and further goals from Sergio Ramos and Welsh star Gareth Bale saw Madrid eventually cruise to three precious points. "Both halves were tricky," Lopetegui told Spanish TV station Movistar.

"Girona have a good collective game, they started well got an early goal and could have had another," said Lopetegui.

"Then we got two penalties. We deserved them because we were playing to win and had a hatful of chances," said the former Spain manager, sacked on the eve of Russia 2018 after his deal with Madrid was revealed.

"We kept calm under pressure and played well enough in the second half to deserve the victory. We were flying forwards too quickly in the first half, we were too keen to attack," he said.

"We were calm and clear and had plenty of space. When we have that this team gets going, it works and the goals start to flow," he said.

"This time it was Gareth, Karim and Sergio, but we don't mind who gets them as long as we get them," he said.

Real Madrid have yet to sign a direct replacement for the Portuguese superstar Ronaldo, who switched to Juventus in July after scoring 450 goals in 438 games over nine seasons at the club.

Spanish daily Marca said Lopetegui "Proved he was in charge" and was not "afraid to make unpopular decisions for the best of the team.

There was no start either for Thibaut Courtois who joined the club from Chelsea, Real's major summer signing had to watch the popular Costa Rican Keylor Navas turn in a solid game in goal.

"We have tried to explain it but it isn't easy, that much is clear," said the new coach. "I have two great goalkeepers. Three if you count Kiko Casilla."