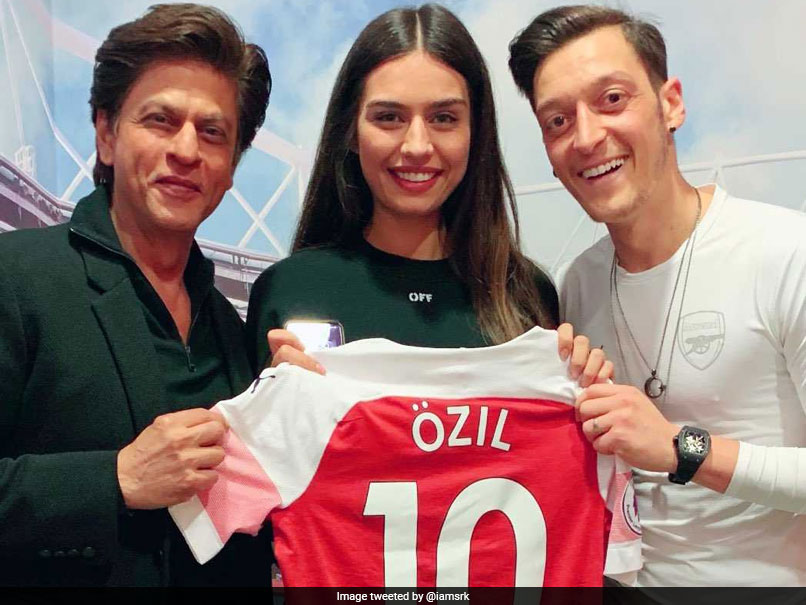 Shah Rukh Khan sent Twitter into frenzy after posting pictures with Premier League club Arsenal's star midfielder Mesut Ozil and his fiancee  Amine Gulse. The Bollywood superstar posted two pictures -- one with Mesut Ozil and the other with Amine Gulse -- and in both Shah Rukh Khan is seen holding up the Arsenal footballer's famous No.10 jersey. "What a lovely evening @Arsenal congratulations. Thx @MesutOzil1088 & #AmineGulse for your warmth love & hospitality. See u guys soon in India," wrote Shah Rukh Khan in his Twitter post.

Mesut Ozil was in action on Monday night with Arsenal hosting Newcastle United at the Emirates Stadium. Aaron Ramsey and Alexandre Lacazette was on the scoresheet as Arsenal eased to a 2-0 win to climb to third spot in the Premier League.

Unai Emery's side climbed two points above fourth placed Tottenham Hotspur and fifth placed Manchester United to bolster their chance of qualifying for the Champions League via a top-four finish with seven games to go.

It is the first time Arsenal have been as high as third place since April 2017, highlighting their improvement since former Paris Saint Germain boss Emery replaced Arsene Wenger at the end of last season.

The future still looks bright for Arsenal, who recorded a 10th consecutive home league victory for the first time since December 1997 to May 1998.

Arsenal finished with 63 points in Wenger's final season, but Emery has matched that tally with seven games to spare.

Newcastle United Mesut Ozil Football
Get the latest updates on IPL Auction 2023 and check out  IPL 2023 and Live Cricket Score. Like us on Facebook or follow us on Twitter for more sports updates. You can also download the NDTV Cricket app for Android or iOS.