India allowed a 10-man Bangladesh to come back and score a shock goal after talismanic captain Sunil Chhetri's 76th international strike to play out a 1-1 draw in their SAFF Championship opener on Monday. 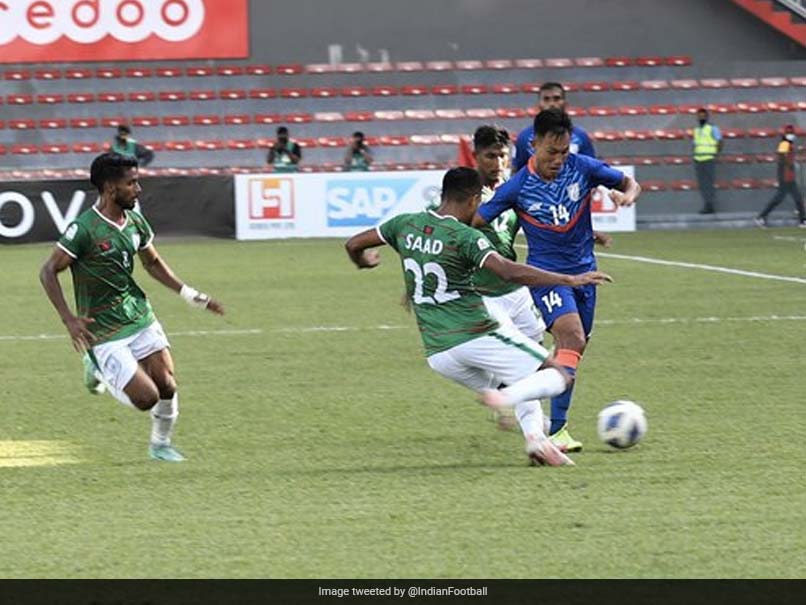 India conceded the equaliser in 74th minute against 10-man Bangladesh on Monday.© Twitter

India allowed a 10-man Bangladesh to come back and score a shock goal after talismanic captain Sunil Chhetri's 76th international strike to play out a 1-1 draw in their SAFF Championship opener on Monday. The 37-year-old Chhetri, playing in his 121st match for India, struck in the 27th minute to place himself just a goal shy of legendary Brazillian Pele (77 goals from 92 matches). He is now in the fourth spot in the list of highest scorers among active footballers, behind Cristiano Ronaldo (111), Lionel Messi (79) and UAE's Ali Mabkhout (77).

India were the better side in the first half and even though they lost possession quite often, they seemed to be cruising.

They also had numerical advantage from 54th minute onwards after Bangladesh player Biswanath Ghosh was sent off for committing a foul on Liston Colaco.

But Igor Stimac's men failed to stop the swift counter-attacking Bangladeshis on their tracks and conceded a goal in the 74th minute to share points, much to the dismay of the Indian camp.

Bangladesh have always been a difficult opponent for India who had needed a late equaliser to draw the first leg of the 2022 World Cup qualifiers in Kolkata before winning 2-0 in the second leg.

India were in the attacking mode right from the start but a swift counter-attack from Bangladesh almost caught them napping and central defender Chinglensana Singh made a crucial clearance after Ibrahim whipped in a low cross from the left for Motin Mia.

Bangladesh also got a few corners but India were in ascendency after that with Udanta Singh, who returned after missing two Nepal friendlies, managing to outwit his marker and providing crosses from the flank.

Manvir Singh had a feeble head-in from one such cross in the 24th minute but Chhetri was not the one to miss the other one three minutes later.

Pritam Kotal released Udanta on the right flank who cut back the ball from near the byline and a perfectly-placed Chhetri smashed it into the roof of the net.

Liston Colaco, who had an impressive outing, had a go at the Bangladesh goal in the 36th minute without any success. Three minutes later, Chhetri had another powerful left-footed strike but goalkeeper Anisur Rahman pulled off a diving save.

India survived a scare in the 40th minute, this time also from a swift counter-attack from the Bangladeshis. But, goalkeeper Gurpreet Singh Sandhu made a diving save against Biplo Ahmed's shot to keep India's lead intact.

Stimac replaced Anirudh Thapa by bringing Brandon Fernandes in the middle of the park on resumption and India also got a numerical advantage after Biswanath Ghosh was sent off in the 54th minute for bringing down Colaco with only the goalkeeper in front.

Three minutes before that, however, Bangladesh had a chance to equalise but Rakib Hossain shot wide after finding himself free inside the Indian box.

Bangladesh goalkeeper Rahman made a double save in the 61st minute as he blocked shots from Manvir and Udanta.

Stimac substituted Colaco with Lalengmawia and Udanta with Rahim Ali just after the hour mark. But the Bangladeshis, playing under a new coach after the 2022 World Cup qualifiers, pulled one back in the 74th minute despite numerical inferiority.