Robert Lewandowski's first-half goal sealed a 1-0 win at Werder Bremen which saw Bayern Munich become the first team to secure a top league title on the pitch since the coronavirus lockdown. 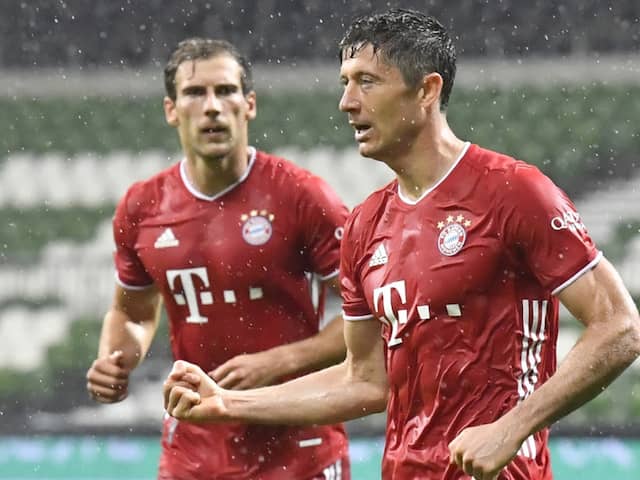 Robert Lewandowski said he hopes Bayern Munich will be able to play in front of their own fans again soon after winning an eighth straight Bundesliga title on Tuesday behind closed doors. Lewandowski's first-half goal sealed a 1-0 win at Werder Bremen which saw Bayern become the first team to secure a top league title on the pitch since the coronavirus lockdown. "It was tough without our fans, without the energy they give us, but we are happy that we are German champions again," said Lewandowski after Bayern won their eighth straight match following the resumption of German football last month.

"It wasn't easy, but we showed our quality.

"I hope we can play in front of our fans in our stadium soon."

Club chairman Karl-Heinz Rummenigge admitted it was a "curious, strange" feeling to see only a handful of Bayern officials and backroom staff in the Weserstadion to cheer the players.

Lewandowski admitted Bayern endured a nervous last few minutes as only a finger-tip save from goalkeeper Manuel Neuer protected the lead.

"When you are 1-0 up, you know you need to score again to be sure. Werder Bremen played well, but luckily for us, we managed to hold them out," said Lewandowski.

"The most important thing is that we can celebrate as German champions.

"That was typical of 'Manu' (Neuer), he loves saves like that and he did really well and we had to be really careful with their long balls."

Bayern face Bayer Leverkusen in the German Cup final on July 4 and are among the favourites to win the Champions League.

"We have our next game in three days, that is the priority, but after that, we will have enough time to prepare for the Champions League," said Lewandowski.