Newcastle United Climb Away From Danger Zone With Burnley Win

Victory saw Newcastle move up into 13th place in the Premier League table, four points clear of the bottom three. 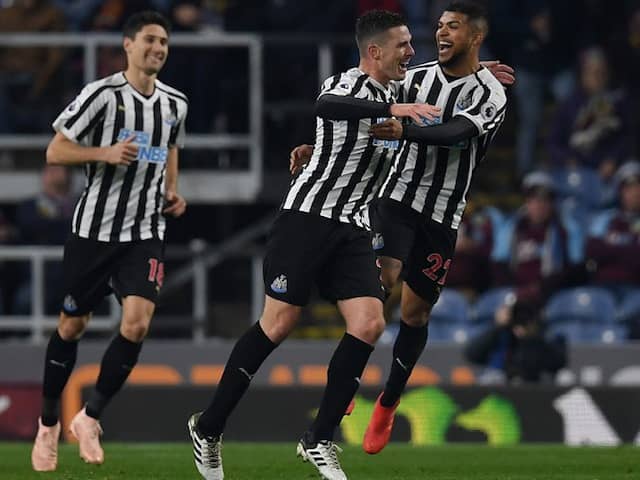 Newcastle United pulled further clear of the Premier League relegation zone with a third successive win and first at Turf Moor in over 40 years as they beat Burnley 2-1 on Monday. Federico Fernandez's fourth-minute shot, which took a huge deflection off Ben Mee, gave Rafael Benitez's Newcastle an early lead before the visitors doubled their lead through Ciaran Clark in the 23rd minute. Burnley pulled a goal back courtesy of Sam Vokes's header five minutes before half-time. Newcastle then squandered several chances to put the result beyond doubt after the break, with Matt Ritchie missing from close range while Joselu hit a post.

They survived a late Burnley fightback to hold on for their first win at Turf Moor since December 1975.

Victory saw Newcastle move up into 13th place in the table, four points clear of the bottom three, with Burnley just a point above the relegation zone.

The scenes at full time after a third straight @premierleague victory! #NUFC pic.twitter.com/nRUoQSxC7C

"The main thing was the effort of the players," Benitez told Sky Sports.

"We stuck to the gameplan. We suffered a bit at the end but we could have scored a third goal."

KI SUNG-YUENG praised United for a "controlled" display as the Magpies beat @BurnleyOfficial to record a third straight victory in the @premierleague.

Frustrated Burnley boss Sean Dyche said: "There was an unlucky goal and then a poor goal.

"On balance we probably deserved something but once you give those goals away it's difficult at 2-0 down in the Premier League."

The game kicked off 30 minutes late after referees' assessor Eddie Wolstenholme collapsed in the tunnel and was taken to hospital.

But the delay did not disturb Newcastle who went ahead when Chris Wood failed to clear a corner before Mee's half-hearted attempt to block Fernandez's shot only diverted the ball into the top corner.

But Burnley scored against the run of play in the 40th minute when Vokes looped a header over Martin Dubravka, with the Newcastle goalkeeper a long way off his line.

Newcastle should have gone 3-1 up five minutes into the second half when DeAndre Yedlin's cross-shot was deflected into the path of Ritchie, who somehow shot wide from just a few yards out.

Joeslu then hit the post before Yedlin make an important block at the other end to preserve Newcastle's lead.

Burnley Ciaran Clark Sam Vokes English Premier League Burnley vs Newcastle United, Game week 13 Football
Get the latest Cricket news, check out the India cricket schedule, Cricket live score . Like us on Facebook or follow us on Twitter for more sports updates. You can also download the NDTV Cricket app for Android or iOS.