AIFF president Praful Patel will seek to convince Sepp Blatter about India's ability to host the 2017 Under-17 Football World Cup when he meets the FIFA chief in Zurich. 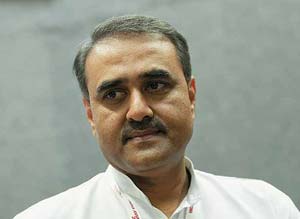 AIFF president Praful Patel will seek to convince Sepp Blatter about India's ability to host the 2017 Under-17 Football World Cup when he meets the FIFA chief in Zurich.

The country's chances of hosting the tournament diminished after the FIFA recently failed to give a positive reply to the Indian government's letter, which was forwarded to the world governing body by the All India Football Federation.

"FIFA has got certain guarantees formats. According to me, it is impossible to comply with everything that is there in the formats, in India. I will meet president Blatter on my way to the World Economic Forum in Davos and discuss these issues," Patel said on Tuesday.

Patel said that the "language of the FIFA documents" does not fit into the Indian system.

"I will try to convince them. I can tell you that the AIFF has fulfilled all the requirements. We have hosted big international sporting events like the Commonwealth Games. And moreover, the U-17 World Cup is more of a developmental project," he said.

Though the AIFF is yet to come to a definitive conclusion as far as chances of organising the event is concerned, the FIFA strictly maintains that it will not give the green signal unless and until it is assured of a few "guarantees" from the the Indian government.

"FIFA is asking for some guarantees from the government. We have then written to the government and they rejected it initially but we convinced them and sent the letter again, requesting them to go through it once again," AIFF general secretary Kushal Das had said earlier.

"FIFA is asking for guarantees like securities, tax, broadcasting, etc...we will get to know by March."

The Sports Ministry had said that FIFA wants some specific formats to be followed.

"There are some 17-18 items that FIFA wants to be included. So we have got in touch with about 8-9 ministries and they, in turn, have compiled everything and sent it to AIFF. But we are yet to get a response from the AIFF," Sports Secretary P K Deb told PTI.

Even though the AIFF had submitted its bid within the deadline after getting the approval of the central and state governments, FIFA's general secretary Jerome Valcke, during his visit to India last year, had warned that the country will not get the prestigious event if it fails to meet the strict criteria.