Jurgen Klopp said senior figures within the club who control the finances have the final say as the financial implications of the coronavirus pandemic take their toll. 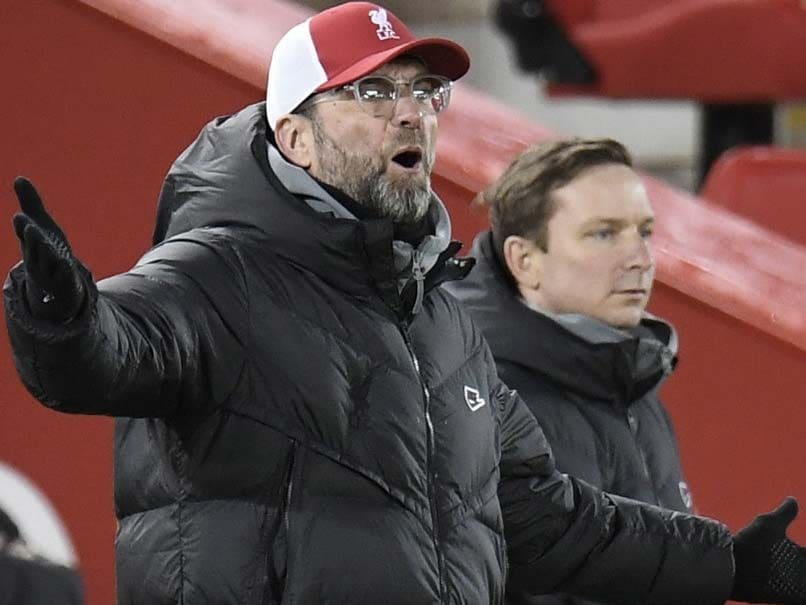 Jurgen Klopp vowed not to "cry like a five-year-old" if Liverpool fail to deliver the players he wants.© AFP

Jurgen Klopp vowed not to "cry like a five-year-old" if Liverpool fail to deliver the players he wants in the January transfer window. Klopp's injury-hit side have slumped to fourth in the Premier League after five games without a win. The champions sit six points behind leaders Manchester United and lost at Anfield in the league for the first time since 2017 when Burnley won 1-0 on Thursday. The crux of Liverpool's crisis is a series of injuries to defenders Virgil van Dijk, Joe Gomez and Joel Matip.

Van Dijk and Gomez are long-term absentees and Matip has battled fitness issues, forcing Klopp to use midfielders Fabinho and Jordan Henderson at centre-back.

Liverpool have been destabilised as a result, but Klopp has been unable to convince his employers to bring in a replacement so far during the transfer window.

Klopp said senior figures within the club who control the finances have the final say as the financial implications of the coronavirus pandemic take their toll.

"I am not a five-year-old kid any more and if I don't get what I want I start crying," Klopp said ahead of Sunday's FA Cup fourth round trip to Manchester United.

"Most of the time in my life I didn't get what I want. We are all probably pretty much used to that.

"A centre-half would help 100 per cent. Would we score more goals with a centre-half? I am not sure. Would it give us more stability in specific moments? Probably yes.

"It is not about what it would be like with someone else and never ever we spoke in the transfer window like this because it would be an excuse and we don't need that."

Four league matches without a goal is the club's worst run in almost 21 years.

However, Klopp refused to see it as any bigger a challenge than anything else he has encountered at Anfield.

"Everything we did in the last five years felt like a challenge. There is a different challenge. Is it as big? I don't know," he added.

"It is not like when we win the league I put my feet on the desk and think, 'That's it now' and smoke a cigar and think, 'Well done, from now on everything will work without any doing of mine'.

"It is not a situation you want but if you are not happy with a situation then you work and that is what we will do.

"We believe 100 per cent we can change that with this squad. We don't go, 'If we don't get this or that we cannot perform'.

Liverpool English Premier League Jurgen Klopp Football
Get the latest updates on IPL Auction 2023 and check out  IPL 2023 and Live Cricket Score. Like us on Facebook or follow us on Twitter for more sports updates. You can also download the NDTV Cricket app for Android or iOS.