What Has Gone Wrong In Liverpool's Premier League Title Defence?

A remarkable 68-game unbeaten run in the league at Anfield came to an end in shock fashion as Burnley became the first visiting side to emerge victorious in nearly four years. 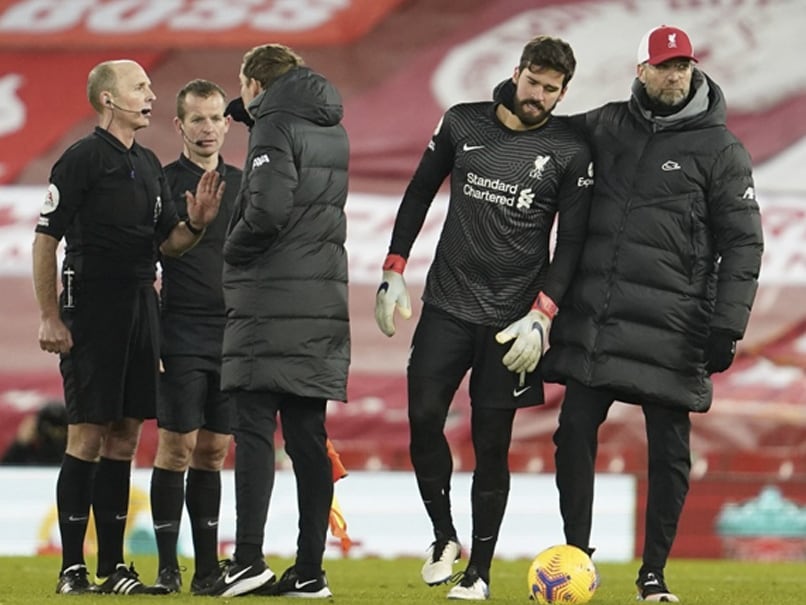 Liverpool have gone five games without a Premier League win for the first time since 2017.© AFP

After romping to a first league crown for 30 years last season, Liverpool are suffering a hangover in their title defence as Jurgen Klopp's men have gone five games without a Premier League win for the first time since 2017. A remarkable 68-game unbeaten run in the league at Anfield came to an end in shock fashion on Thursday as Burnley became the first visiting side to emerge victorious in nearly four years with a 1-0 win. Liverpool are still just six points off the top in fourth, but momentum is with the Manchester giants as United and City look set to do battle for the title.

Klopp, meanwhile, is already turning his attention just to ensuring Liverpool do not fail to qualify for next season's Champions League by dropping out the top four.

So how has a side that set club record points tallies in each of the past two seasons fallen so fast?

The loss of the talismanic Virgil van Dijk for the season to knee ligament damage in October would have been a big enough loss on its own to challenge Liverpool's title credentials.

However, the Dutchman's absence has been compounded by another long-term injury to a centre-back in Joe Gomez and Joel Matip's fitness problems.

Without a recognised senior centre-back in recent weeks Klopp has resorted to fielding midfielders Fabinho and Jordan Henderson at the back.

But that has come at the expense of destabilising the rest of the team.

Without the comfort of Van Dijk and Gomez's pace to hold a high line and the ball-winning ability of Fabinho and Henderson in midfield, Liverpool's pressing game has eased off.

Injuries have also taking their toll further forward without Diogo Jota over the past month.

The Portuguese made a blistering start to his Liverpool career, scoring seven times in his first nine appearances.

Since Jota suffered a costly knee injury in a Champions League dead rubber against Midtjylland in early December, Klopp is short on options to provide competition for Mohamed Salah, Sadio Mane and Roberto Firmino.

Salah, Mane and Firmino will live long in even Liverpool's storied history as a front three that ended the Reds' long wait for a league title and delivered a sixth European Cup.

Over the past four seasons they have been the perfect foil for one another, combining to score 248 goals.

However, with all three off form and Jota injured, the lack of goal threat in the rest of the team has been exposed.

Outside the front four, the entire Liverpool squad has provided six goals in 19 league games with no player scoring more than once.

That is more than a temporary problem with Salah, Mane and Firmino all at least approaching the latter end of their peak years.

But the lack of back-up for Klopp to work with was on show against Burnley as Salah and Firmino were left on the bench.

In came Divock Origi and Alex Oxlade Chamberlain, but both were hauled off early in the second half after Origi missed by far his side's best chance of the match.

Klopp's men followed up on an unprecedented title showdown with Manchester City in 2018/19, which saw them miss out despite amassing 97 points, with a club record 99 points last season.

After also reaching two Champions League finals in the past three seasons and the often soulless atmosphere of a season without full stands, it is understandable if Liverpool's desire has dropped off this season.

At their best, it is the intensity with which Klopp sides play that make them so fearsome.

Even when results were still consistently good early in the season, the German was bemoaning the draining schedule his side faced due to the late start to the campaign, enforced by the coronavirus pandemic's impact on last season.

With a depleted squad, little recovery time and no raucous Liverpool support to rally them, the Reds have the look of a side run into the ground.

The worry for Klopp is there is no guarantee the slide has bottomed out. After a trip to Manchester United in the FA Cup on Sunday, Liverpool face five of the top seven in their next six league games.

Burnley Virgil Van Dijk Mohamed Salah Sadio Mane Roberto Firmino Jurgen Klopp English Premier League Football
Get the latest updates on IPL Auction 2023 and check out  IPL 2023 and Live Cricket Score. Like us on Facebook or follow us on Twitter for more sports updates. You can also download the NDTV Cricket app for Android or iOS.