England manager Gareth Southgate refused to comment on the nature of the protocol breach by Mason Greenwood and Phil Foden. 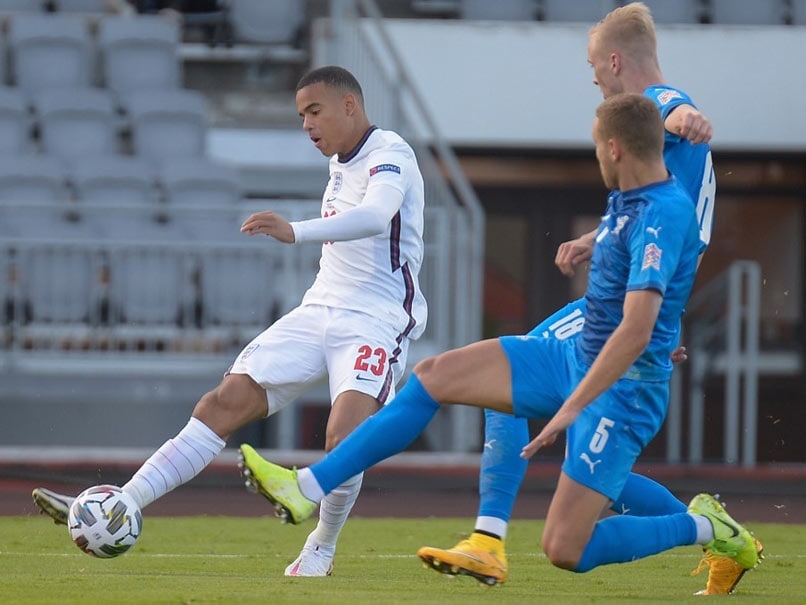 Mason Greenwood made his England debut during their 1-0 win against Iceland.© AFP

Gareth Southgate branded Phil Foden and Mason Greenwood "naive" after the England pair were sent home for a "serious" breach of coronavirus protocols in Iceland. England manager Southgate responded to the breach by removing Manchester City midfielder Foden and Manchester United forward Greenwood from his squad for Tuesday's Nations League clash in Denmark. Foden, 20, and Greenwood, 18, had made their senior England debuts in Saturday's 1-0 win against Iceland, but the pair will have to travel home separately from the rest of the squad, who were due to move on to Denmark on Monday.

Although Southgate refused to comment on the nature of the virus protocol breach, widespread media reports said the England pair met two local girls during their time in Iceland.

"Unfortunately this morning it was brought to my attention that the two boys have broken the Covid guidelines in terms of our secure bubble," Southgate told reporters.

"We had to decide they couldn't have interaction with the rest of the team and wouldn't be able to train. Given the procedures we have to follow now, they will have to travel back to England separately."

A Snapchat video released in Iceland appeared to show the players with female company.

Reports said Foden and Greenwood had brought the girls back to England's team hotel, but Southgate said that was not the case.

"Nothing has happened in the areas we occupy in the hotel. We are still getting to the depths of all the information because this was only brought to my attention a couple of hours before training, so I'm still getting to grips with the detail," he said.

"What is clear is there is a breach of the Covid-19 guidelines. I'm not gong into any more details until I'm aware of everything."

Southgate's scheduled media briefing was delayed by an hour as he and the Football Association scrambled to manage the situation, which the England boss only became aware of just hours earlier.

Acknowledging their antics were unacceptable given the current global concern about the coronavirus, Southgate said: "It is a very serious situation and we have treated it that way. They have been naive and we have dealt with it appropriately.

"We are not underestimating how important it is we keep the bubble the way we have."

Southgate said both players had apologised for their behaviour, but conceded they should have acted more responsibly.

"I recognise their age, but of course, the whole world is dealing with this pandemic and there is a responsibility on all ages that they do their part," he said.

"These are two boys I don't know particularly well at the moment so I cannot speak in great depth. I've got to try to speak with them later in the appropriate way."

"They have apologised but everything has happened so quickly and we have to get to the facts."

Asked if Foden and Greenwood, regarded as two of England's brightest young stars, would now face a battle to regain their place in the squad, Southgate added: "All of those things are too early, until I'm totally aware of every situation."

"I'm a father of young adults and I know they can get things wrong. We are not excusing that in this instance and we have to asses everything else moving forward."

City labelled their player's actions "totally inappropriate" and calling his behaviour "well below the standard expected of a Manchester City player".

United said of Greenwood: "We are liaising with the Football Association and are disappointed with the actions of Mason Greenwood over this situation."

The controversy was the last thing Southgate needed after he had to withdraw Harry Maguire from the squad following the Manchester United defender's part in a brawl in Greece.

Maguire was handed a suspended prison sentence and is appealing the verdict.

"All management roles are difficult and this is another level, in terms of what you have to deal and what is expected," Southgate said.

England Football
Get the latest updates on ICC Women's Cricket World Cup 2022 and IPL 2022, check out the Schedule , Live Score and IPL Points Table. Like us on Facebook or follow us on Twitter for more sports updates. You can also download the NDTV Cricket app for Android or iOS.