Watch: Real Madrid Striker Runs From Own Half To Score Epic Solo Goal In Champions League Semi-Finals vs Manchester City 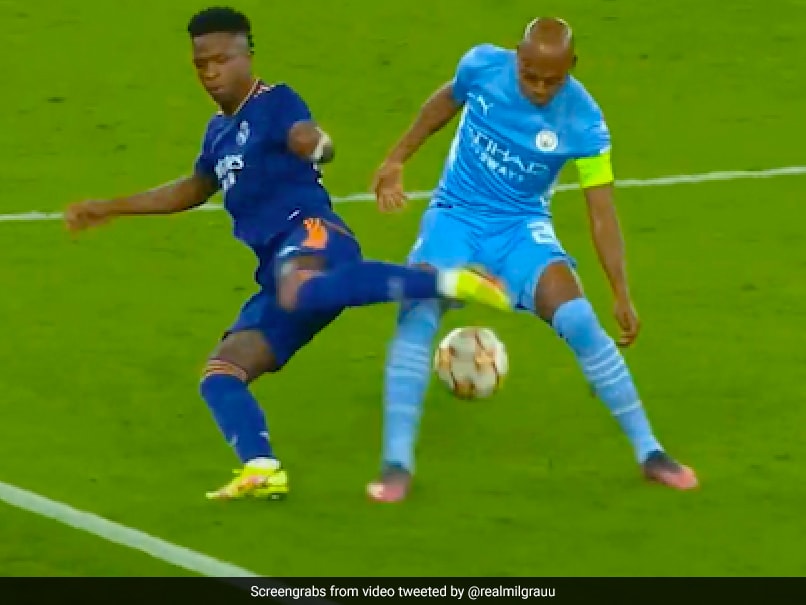 The Manchester City vs Real Madrid Champions League semi-finals fixture at the Etihad Stadium turned out to be a thrilling goal-fest, with seven strikes put past both the keepers in normal time. The final score read 4-3 in City's favour, but Madrid weren't completely outplayed as they extracted immense confidence from the three goals from Karim Benzema (33', 82') and Vinicius Junior (55'). Both teams will again go head-to-head in their second leg semi-finals fixtures at the Santiago Bernabeu Stadium on May 5.

Vinicius Jr's goal was especially brilliant as he showed outrageous skill and great pace to score a marvelous solo effort.

Madrid winger Vinicius received the ball inside his half on the left wing and ran past the defenders at breakneck speed to score a brilliant solo goal. The highlight of that run was surely the no-touch dummy nutmeg that the Brazilian embarrassingly inflicted on City midfielder Fernandinho as he started his run.

Here are the videos of the solo goal and a possible 'career-ending' nutmeg by Vinicius:

The home side did take a crucial two-nil lead inside the first 12 minutes through Kevin de Bruyne (2') and Gabriel Jesus (11'), however, in-form striker Benzema helped the visitors reduce the deficit to only a single goal at the end of the first half.

Phil Foden made it 3-1 eight minutes into the second half, but then Vinicius Jr's heroics shut the noisy crowd at the Etihad.

Bernardo Silva restored City's two-goal cushion, but the lead was short-lived as Karim Benzema coolly converted from the penalty spot in the 82nd minute.

The veteran forward, who is enjoying a dream season, hit a 'Panenka' to ensure Real Madrid were still very much in with a chance of making the final.

City enjoyed more possession of the ball, had more shots on target and even completed more passes than Madrid, but they did end up conceding 11 fouls to Madrid's five, which helped the visitors dictate the speed of the game at crucial junctures of the game.

After match both the managers sounded confident and satisfied with their team's performances.

"I want to try to convince to my players that we won the game and we have to go to Bernabeu to play like we did today," said City manager Pep Guardiola.

"It doesn't matter if we would have won by one goal or four, in the Bernabeu you have to show who you are otherwise there is no chance. It is a good test for us."

"We started the game very badly, we were too soft in conceding the goals," said Madrid boss Carlo Ancelotti.

"After that the team showed what they have shown recently, a great reaction.

Real Madrid Vinicius Football
Get the latest updates on ICC T20 Worldcup 2022 and CWG 2022 check out the Schedule, Live Score and Medals Tally. Like us on Facebook or follow us on Twitter for more sports updates. You can also download the NDTV Cricket app for Android or iOS.