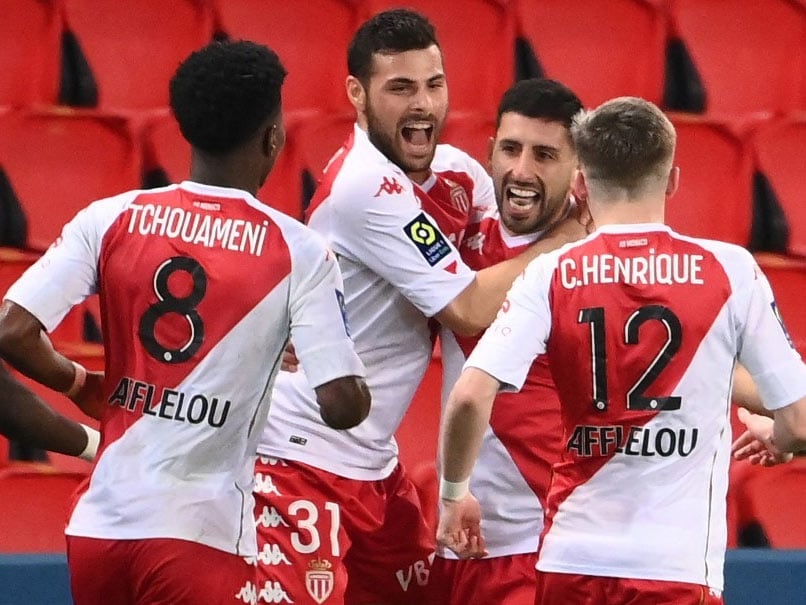 Sofiane Diop and Guillermo Maripan were on target for Monaco against Paris Saint-Germain.© AFP

Paris Saint-Germain suffered a Champions League hangover as a 2-0 home defeat against Kylian Mbappe's old side Monaco on Sunday damaged their Ligue 1 title hopes after Lille earlier reclaimed top spot. Sofiane Diop and Guillermo Maripan scored to give Monaco the points as they stretched their unbeaten run to 11 games and moved to within two points of their opponents, who sit in third place. While Monaco remain in contention for a return to the Champions League, PSG find themselves a point behind Lyon in second and four points adrift of Lille, who retook top spot earlier on Sunday with a 4-1 win at Lorient.

It was a disappointing night for PSG as they failed to pick up where they left off in midweek, when they destroyed Barcelona in the first leg of their Champions League last-16 tie, Mbappe scoring a hat-trick in a 4-1 win.

"We were not at the level we need to be at to win, and as coach I take responsibility for that," said coach Mauricio Pochettino, who left Marco Verratti on the bench at kick-off in the only change from the Barcelona game.

"We spoke about the importance of maintaining our concentration levels, but we can't exactly replicate our performance from one evening to the next."

There is now a genuine chance that PSG will miss out on the Ligue 1 title for the first time since Mbappe's Monaco pipped them in 2017.

Almost exactly five years to the day after he scored his first Ligue 1 goal as a 17-year-old for the principality side, Mbappe was kept quiet by the Monaco defence, while Neymar watched from the stands as he continues to recover from injury.

Monaco had already beaten the Parisians at home in November and they went in front here in the sixth minute when Ruben Aguilar knocked down Kevin Volland's cross for Diop to head in.

The home side failed to muster a shot on target in the first half and continued to lack inspiration after the break, as Monaco doubled their lead in the 51st minute.

Chilean defender Maripan dispossessed Ander Herrera inside the box and coolly slotted into the corner for what was already his fifth goal in 2021.

Mbappe had scored seven times in seven previous games against his old club since joining PSG in 2017, but he could not add to that tally as Monaco became the first team to beat PSG twice in the same Ligue 1 season since Nancy in 2011/12.

They are the third team to beat PSG at the Parc des Princes in Ligue 1 this season, after Marseille and Lyon.

"We said we must delete Kylian Mbappe because he is a great striker, keep the ball away from his side, and I think we showed another side to our team because we didn't concede a lot of chances," said Monaco coach Niko Kovac, as he played down his club's chances of finishing in the top three and returning to the Champions League.

"At the moment it is too early because we are not yet on the same level as Lille, Lyon and PSG," he said.

Lyon had gone to the summit on goal difference with a 3-2 victory at Brest on Friday, but Lille responded to make it a club record seven straight away wins in the top flight, with Jose Fonte and Domagoj Bradaric also scoring after Andreaw Gravillon's own goal had put them ahead in Brittany.

Gravillon deflected Jonathan David's shot into his own net midway through the first half, only for Jerome Hergault to equalise.

Veteran centre-back Fonte restored Lille's advantage in the 38th minute and French international Ikone curled in a free-kick just before the hour mark.

Lorient had gone unbeaten through their previous five outings, notably beating PSG and holding Monaco, to boost their survival hopes.

However, Bradaric wrapped up a big win for Lille in stoppage time, plunging Lorient back into the bottom three on goal difference behind Nantes.

Paris SG Lille Football
Get the latest updates on IPL Auction 2023 and check out  IPL 2023 and Live Cricket Score. Like us on Facebook or follow us on Twitter for more sports updates. You can also download the NDTV Cricket app for Android or iOS.