Juventus advanced on away goals to Wednesday's final in Rome thanks to February's 1-1 first-leg draw at the San Siro. 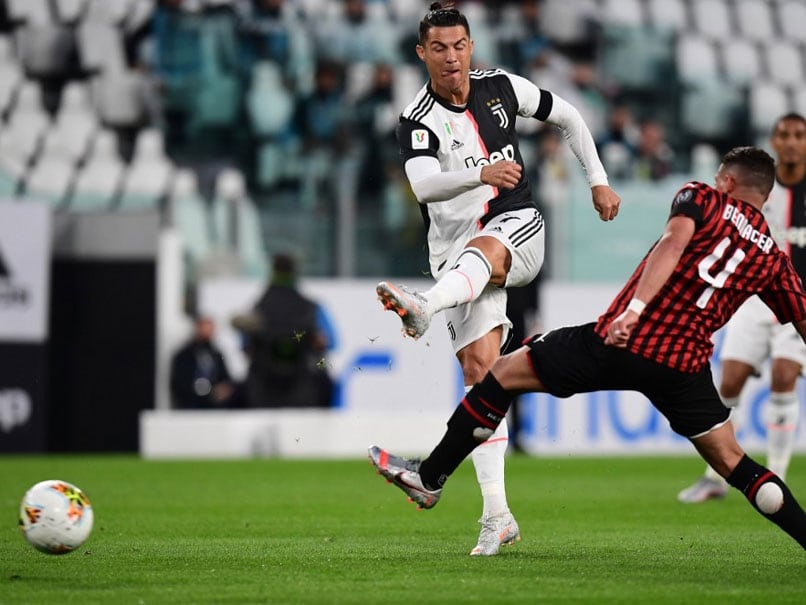 Juventus reached the Italian Cup final on Friday after a goalless draw with 10-man AC Milan in the semi-final, second leg in Turin on the day football returned to Italy after three months away. Serie A champions Juve advanced on away goals to Wednesday's final in Rome thanks to February's 1-1 first-leg draw at the San Siro, despite an under-par display against a Milan side who played 74 minutes with a man less and which featured a missed Cristiano Ronaldo penalty. At the capital's Stadio Olimpico, Maurizio Sarri's side will face either Napoli or Inter Milan, the last side Juve faced before football entered into its coronavirus-enforced hiatus in March.

Napoli take on Antonio Conte's Inter at Naples' Stadio San Paolo on Saturday with a 1-0 lead from the first leg, in another match set for an eery atmosphere without supporters.

"It was odd and difficult at the start, playing in an empty stadium after 90 days away," said Leonardo Bonucci to public broadcaster RAI 1.

"We've shaken off a dark moment for the whole world. I hope being back will offer the fans at home a bit of hope and joy. We want to give them something more on Wednesday."

A feisty start belied the two teams' long absence from the pitch, with Juve -- missing the likes of Giorgio Chiellini and Gonzalo Higuain -- roaring out of the blocks and Milan putting in some questionable challenges to try to stop themselves from being overrun.

Juve should have been ahead in with just 15 minutes on the clock when Andrea Conti clipped the ball in the penalty area with his elbow and conceded a penalty after a VAR check.

Ronaldo hit the woodwork with the resulting spot-kick, but while that should have been a reprieve for the away side, they found themselves a man down seconds later when Ante Rebic kicked Danilo in the head.

With Zlatan Ibrahimovic out injured and Samu Castillejo suspended, Stefano Pioli's side were missing some firepower going forward, but managed to create problems for Juve despite spending most of the match on the back foot.

Hakan Calhanoglu had Milan's best chance two minutes after the restart, flashing a free header wide, while Simon Kjaer should have done better with another header 10 minutes from the end.

However Juve also had their chances, with Milan stopper Gianluigi Donnarumma doing well to keep out Blaise Matuidi's thumping close range effort on the half-hour mark, and two great efforts from Paulo Dybala and Alex Sandro late in the second half.

The match was played on the day Italy would have kicked off Euro 2020 in Rome had the tournament not been postponed for a year.

More than 34,000 people on the peninsula have died because of the coronavirus with the vast majority in northern regions like Piedmont and Lombardy which host Juve and Milan.

Both teams held a minute's silence before kick-off for those who lost their lives to the virus before breaking out into applause for healthcare workers, three of whom were stood in the centre circle.

Juventus players warmed up before the match in T-shirts with the message "No Racism", while Milan wore tops on with "Black Lives Matter" written on them, in solidarity with global protests over the death of George Floyd.

The few fans hanging around the Allianz Stadium told AFP that they were happy to see football come back as the country edges towards normality.

However they were sad that matches had to take place without the passionate support that accompanies most matches in Italy.

"It's hard for a team not to be able to count on the presence of the cheering fans," said Massimiliano Balduzzi, 47, from Bergamo, one of the country's worst-hit areas.

"I believe that there should always be cheering at the stadium. Unfortunately, with what happened, we can only keep on waiting and hope that everything will go well."