Watch: Fenerbahce Midfielder Chased Off The Pitch During Mass Brawl In Istanbul Derby

Three players were sent off after the final whistle following a brawl of 30 players and staff during the Istanbul derby between Galatasaray and Fenerbahce. 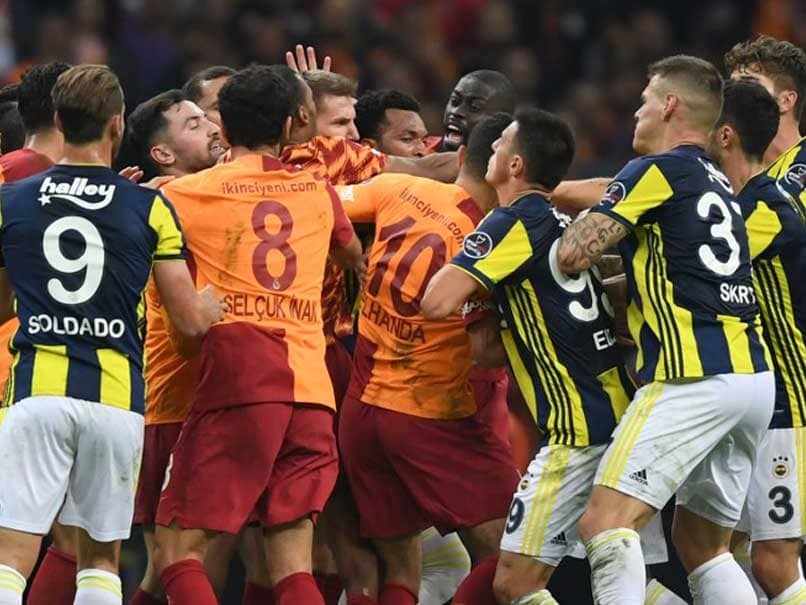 A mass brawl took place after full-time during the Istanbul derby between Galatasaray and Fenerbahce.© AFP

Three players were shown a red card after a mass brawl took place in a fiery Istanbul derby between Galatasaray and Fenerbahce at the Turk Telekom Arena on Friday night. Fenerbahce midfielder Jailson scored a sensational equaliser but following the final whistle chaos descended and he was chased off the pitch after a massive coming together between both sets of player. Hosts Galatasaray looked to be cruising with a 2-0 lead through Ryan Donk and Martin Linnes but Mathieu Valbuena and Jailson earned Fenerbahce a crucial 2-2 draw.

According to a Daily Mail report, Galatasaray's Badou Ndiaye, on loan from Stoke, Fenerbahce's former Tottenham forward Roberto Soldado and Jailson were all sent off following the altercation in the centre of the field.

The report claimed that Jailson appeared to have taunted the Galatasaray fans after scoring the equaliser and that enraged the home team, who charged at the Brazilian midfielder after the final whistle.

Jailson was seen running off the pitch with enraged Galatasaray chasing him.

Classic derby. There goes chaos after both Istanbul teams Galatasaray and Fenerbahce share the points. Of course not surprised seeing these fights just in the middle of the pitch. pic.twitter.com/BuiYZXx15y

Former Tottenham striker Roberto Soldado and Liverpool defender Martin Skrtel also seemed to be caught up in the melee with the former even pictured grasping the neck of Younes Belhanda.

Police had to be called onto the pitch as the skirmish even boiled over to the stands with both sets of supporters clashing. One fan even ran onto the pitch in all the confusion but was quickly stopped in his tracks by security personnel and taken away.

After 11 matches for both teams, Galatasaray are second in the Turkish Super Lig table with 20 points. However, with just two wins, four draws and five losses, Fenerbahce have just 10 points and languish in 15th place.

Galatasaray Fenerbahce Football
Get the latest updates on India vs England Series, India vs England , live score and IPL 2021 Auction . Like us on Facebook or follow us on Twitter for more sports updates. You can also download the NDTV Cricket app for Android or iOS.