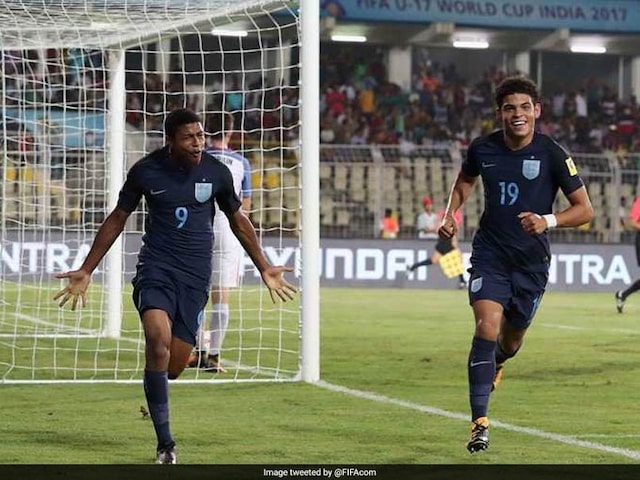 Liverpool player Rhian Brewster scored a second hat-trick in two games Wednesday to send favourites Brazil crashing out of the Under-17 World Cup and England into their first final. The striker, who scored three goals in the 4-1 quarter-final win over the United States, floored the South American giants in the determined 3-1 win in Kolkata. England will play the winners of the second semi-final between Spain and Mali in Saturday's final.

"We are going to work hard and hopefully win," said Brewster after the game.

Brewster linked up brilliantly with Manchester City midfielder Phil Foden who provided the crosses for the match winner.

No words to describe how we all feel right now!! One last big push ahead fully focused on that now #U17WorldCup @England pic.twitter.com/hZKUeR7Z7B

Brewster put England ahead in the 10th minute despite an attacking start by the Brazilians.

Brazil forward Wesley snatched an equaliser in the 21st minute to set up a thrilling match in front of a near capacity crowd.

But Brewster made all the running. He put England ahead in the 39th minute, becoming the top goal scorer of the tournament with his sixth strike.

His seventh goal of the event, which is being hosted by India for the first time, came in the second half as it shut the doors on the three-time champions.

The 77th minute strike was the third time unlucky for Brazil goalkeeper Gabriel Brazao, who had not let in a goal from open play in the tournament until the last-four clash.

Comments
Topics mentioned in this article
England Brazil FIFA U-17 World Cup Football
Get the latest updates on IPL 2020, check out the IPL Schedule for 2020 and Indian Premier League (IPL) Cricket live score . Like us on Facebook or follow us on Twitter for more sports updates. You can also download the NDTV Cricket app for Android or iOS.