Chile, the South American runners-up and who were having acclimatisation issues with the Indian conditions, looked clueless and failed to counter the wave of English attacks. 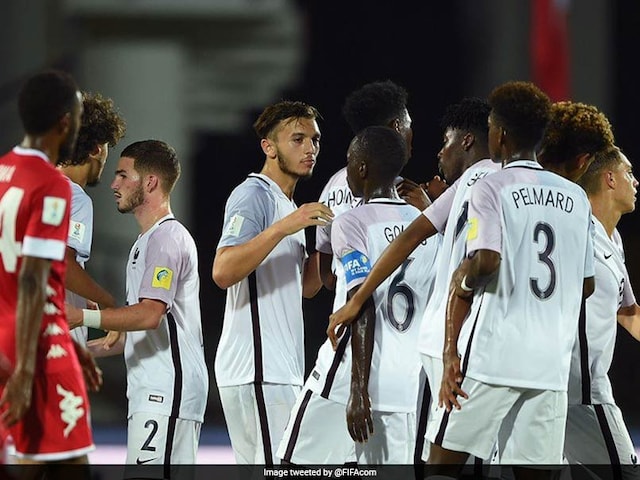 England celebrate after scoring a goal against Chile in a FIFA U-17 World Cup match.© Twitter

A star-studded England lived up to their billing as star winger Jadon Sancho scored twice in a 4 -0 rout of Chile in a highly entertaining group match of the FIFA U-17 World Cup on Sunday. England, the European qualifying tournament runners-up, toyed with their South American rivals with 64 per cent ball possession and Chile were at the mercy of the rampaging Young Lions forwards several times. England had as many as as 21 shots at the goal out of which nine were on target as the Group F match gradually turned into a one-sided one.

Sancho struck in the 51st and 60th minutes, while Callum Hudson Odoi (5th) and Angel Gomes (81st) were the other scorers.

Chile, the South American runners-up and who were having acclimatisation issues with the Indian conditions, looked clueless and failed to counter the wave of English attacks. They had just four attempts at the England goal, all of them off target.

To make matters worse for Chile, who had watched blockbuster Bollywood movie 'Chak De! India' as part of their build-up, they were reduced to 10 men in the 79th minute when goalkeeper Julio Borquez was shown a straight read card for a harsh foul on an opposition player.

For the sizeable crowd at the brand new Salt Lake Stadium, it was a treat to watch a quality England team scoring goals at will.

England coach Steve Cooper did not start with Manchester United's Angel Gomes but still completely dominated the first half with overwhelming 70 per cent possession.

Sancho showed his class with his deft footwork. He and striker Rhian Brewster were a constant threat for Chile from the left side.

Sancho, who recently joined Borussia Dortmund from Manchester City, weaved his way through the Chile box from the left and sent a brilliant pass for Callum Hudson Odoi who calmly sent the ball past the goalkeeper to give England a 1-0 lead in the fifth minute.

England could have doubled their lead in the 19th minute but Brewster missed a sitter from a handshaking distance.

After playing a one-two with Odoi at the edge of the box, Philip Foden curled a cross towards an unmarked Brewster, but the striker's shot went wide.

Chile got their first proper shot in the 36th minute but Maximiliano Guerrero's ambitious long range effort flew way above the cross bar.

The Young Lions did even better in the second half, pumping in three more goals.

If the first goal was an assist from Sancho, the star left winger, who will play only upto the group stage, himself entered his name in the score sheet in the 51st minute.

Chile goalkeeper Borquez, who has had a fine tournament in the South American qualifiers, could not hold onto a low cross from the right and Sancho calmly pushed the ball home.

Sancho made the scoreline 3-0 with his second goal. It all started with a gem of a run from George McEachran who dribbled past three defenders at the edge of the penalty box and found Sancho unmarked on the left side. Sancho completed his brace with a great finish.

Cooper brought in Gomes, who recently made a Premier League debut in the 67th minute in place of Odoi, and drama followed.

Chile keeper Borquez ended his nightmarish day when he was red-carded in the 79th minute for a harsh challenge on Brewster. Chile, who had already made three substitutions, were forced to ask midfielder Branco Provoste to take charge under the goalpost.

Chile's misery did not end there as Gomes curled in a brilliant free-kick which went straight into the post for England to complete a 4-0 rout.

Fancied France kicked off their campaign on a rousing note, inflicting a 7-1 humiliation on debutants New Caledonia in a Group E match of the FIFA U-17 World Cup on Sunday. A formidable force in international football, France were on the ball from the word go at the Indira Gandhi Stadium, and their hapless opponents were on the backfoot throughout the match. Interestingly, the French scored six of their seven goals in the first half.

Comments
Topics mentioned in this article
Chile England FIFA U-17 World Cup Football
Get the latest Cricket news, check out the India cricket schedule, Cricket live score . Like us on Facebook or follow us on Twitter for more sports updates. You can also download the NDTV Cricket app for Android or iOS.