Gareth Bale, Gylfi Sigurdsson and Jan Vertonghen were all on target in a one-sided Europa League last-16, first leg win at White Hart Lane which left the Italians with a mountain to climb in the return next week. Chelsea had slumped to a 1-0 loss at Steaua Bucharest while Newcastle carved out a 0-0 draw against Anzhi Makhachkala. 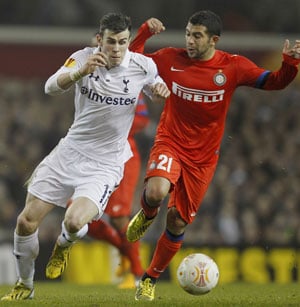 Gareth Bale boosted his sky-rocketing profile with one of the goals which helped Tottenham shock Inter Milan 3-0 on Thursday and help lift Britain's European gloom.

Bale, with his 21st of the season, Gylfi Sigurdsson and Jan Vertonghen were all on target in a one-sided Europa League last-16, first leg win at White Hart Lane which left the Italians with a mountain to climb in the return next week.

The only setback for Spurs was seeing Bale booked for a fourth time this season for diving, a caution which will rule him out of the second leg at the San Siro.

"We played well and set the tempo from the start," said Bale, who famously grabbed a Champions League hat-trick against Inter three years ago.

"We made sure we made it difficult for them and it was a worthy result. It is nice to get a goal, and we take a good lead into the away leg."

Tottenham's win was the only British success in Europe this week.

Earlier Thursday, Chelsea had slumped to a 1-0 loss at Steaua Bucharest while Newcastle carved out a 0-0 draw against Anzhi Makhachkala.

After a traumatic week in the Champions League which saw Manchester United and Celtic knocked out, Chelsea, who captured the continent's top prize last season, put in a toothless display in the Romanian capital.

The only goal came in the 34th minute when Steaua's Raul Rusescu beat Petr Cech from the penalty spot after he had been chopped down by Ryan Bertrand.

Chelsea manager Rafael Benitez made five changes from the side which beat West Brom 1-0 in the Premier League at the weekend, including a recall for John Terry.

"It was a difficult game. It was a good result for them and the pitch was not the best," said Benitez.

"We gave away a soft penalty but we had chances. We will have to go back to Stamford Bridge and have confidence we can win. We all have to push together."

Newcastle, with seven Frenchmen in the line-up, battled out a 0-0 draw against Anzhi Makhachkala, ending the Russians' 100 percent home record in the tournament this season.

In a game of few opportunities, and in front of a smattering of fans inside a freezing Luzhniki Stadium in Moscow, Magpies' manager Alan Pardew won the night's tactical battle against wily Guus Hiddink.

Anzhi's frustrations were perfectly summed up when 30-million-euro signing Willian limped out of the game early in the first half.

The Russians had the better opportunities to break the deadlock with Cameroon star Samuel Eto'o wasting three chances.

At the other end, playmaker Hatem Ben Arfa, returning after a three-month injury absence, and one of Newcastle's French contingent in the starting eleven, had a chip saved by Vladimir Gabulov.

Italian title-chasers Lazio took a huge step closer to the quarter-finals with a 2-0 win in Germany against Stuttgart with Ederson and Ogenyi Onazi scoring either side of the break.

There was also an away win for Fenerbahce with Cameroon striker Pierre Webo grabbing the goal in a 1-0 win at Viktoria Plzen in the Czech Republic.

Comments
Topics mentioned in this article
Football Tottenham Hotspur Newcastle United Chelsea Anzhi Makhachkala Gareth Bale Gylfi Sigurdsson
Get the latest Cricket news, check out the India cricket schedule, Cricket live score . Like us on Facebook or follow us on Twitter for more sports updates. You can also download the NDTV Cricket app for Android or iOS.