Play-acting and feigning injuries to gain unfair advantages are a scourge that football has not been able to do away with. 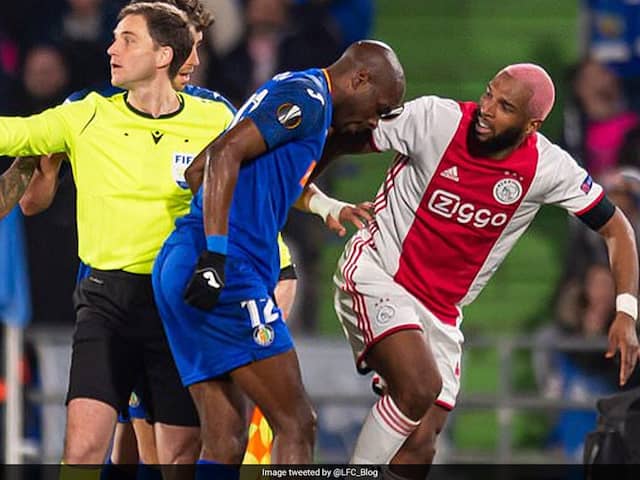 Ryan Babel mimicked his opponent after fouling him during the Europa League match.© Twitter

Many thought a yellow card for diving would end the scourge of play-acting but nothing of the sort has happened as footballers continue to look to fool the referees to gain an unfair advantage on their opponents. Getting a player sent off or yellow carded with an over-the-top reaction to a foul has become a key part of the dark arts used in football. During a Europa League match between Ajax and Getafe, former Liverpool winger Ryan Babel took trolling to a new level by hilariously mocking his opponent's overreaction to a foul.

Getafe's Allan Nyom was writhing around in pain on the ground after a challenge from Babel. Incensed by the reaction of the Getafe defender, Babel mimicked his opponent by falling to the ground and rolling around before mocking his opponent with a fake limp.

While Babel was shown a yellow card for his foul on Nyom, social media was abuzz with mimicking skills:

Ryan Babel has me in stitchers herepic.twitter.com/hAotaKBh3s

Ajax manager Erik ten Hag, however, was not too impressed with his player for mocking an opponent.

"It wasn't smart. I don't expect that from an experienced player," Ten Hag said at his post-match news conference.

"You need to stay calm and use your head. You have to focus on your job, playing football."

"I don't know if I would do it again. I found that the referee was fooled by the opponent at crucial moments. I was done with that," Babel told FOX Sports.

"I thought the opponent was exaggerating a lot, so I got a yellow card.

"At times, we played nicely, but it wasn't good enough. We have a lot to analyse. Hopefully we can make it up to the fans."

Last season's Champions League semi-finalists Ajax put in an underwhelming performance against the surprise packages from La Liga. Getafe's Brazilian duo Deyverson and Kenedy were on target as Ajax lost 0-2 in the first leg at the Coliseum Alfonso Perez stadium.

The second leg of the Europa League tie between these two teams will be held at the Johan Cruyff Arena in Amsterdam on February 27 (local time).