The English Football Association (FA) is to abstain from voting in the upcoming FIFA presidential election between Sepp Blatter and Mohamed Bin Hammam, it was announced on Thursday. 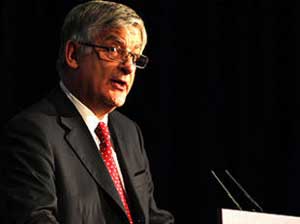 The English Football Association (FA) is to abstain from voting in the upcoming FIFA presidential election between Sepp Blatter and Mohamed Bin Hammam, it was announced on Thursday.

FA chairman David Bernstein said in a statement there were a "range of issues" which made it "difficult" to vote for incumbent Blatter or Asian football chief Bin Hammam.

"The FA Board has today agreed to abstain in the vote for the Presidency of FIFA," Bernstein said.

"There are a well-reported range of issues both recent and current which, in the view of The FA board, make it difficult to support either candidate."

"The FA values its relationships with its international football partners extremely highly. We are determined to play an active and influential role through our representation within both UEFA and FIFA."

"We will continue to work hard to bring about any changes we think would benefit all of international football."

English officials expressed outrage after their bid for the 2018 World Cup ended in humiliation last December, garnering just two votes to be removed in the first round before Russia went on to win.

Since then a British parliamentary inquiry has heard testimony from former English FA chairman David Triesman alleging FIFA voters demanded bribes and favours in the bidding contest for the 2018 World Cups.

Officials from England's Premier League were believed to have argued in favour of a vote for Bin Hammam.

However the Qatari head of the Asian Football Confederation was forced onto the defensive after fresh bribery allegations concerning Qatar's stunning victory in the battle for the 2022 World Cup.

Blatter earlier this week dismissed English grievances against FIFA, accusing the FA and English media of sour grapes over their 2018 defeat.

"The British press have always been very critical regarding football and FIFA. It didn't start with me. It's been a long time," Blatter told AFP.

"There is a sort of stubbornness against football and FIFA. Of course there is the fact that England didn't get the World Cup. But perhaps you have to analyse why."

"The English say: 'If we'd been told that the World Cup was going towards new territories, we wouldn't have bid.'"

Comments
Topics mentioned in this article
Alex Ferguson Wayne Rooney FIFA Football Mexico South Africa Republic of Ireland France
Get the latest updates on ICC T20 Worldcup 2022 and CWG 2022 check out the Schedule, Live Score and Medals Tally. Like us on Facebook or follow us on Twitter for more sports updates. You can also download the NDTV Cricket app for Android or iOS.