"My Hero Is No More": Sourav Ganguly Pens Emotional Tribute For Diego Maradona

Sourav Ganguly paid tribute to Diego Maradona, who died of a heart attack at the age of 60. 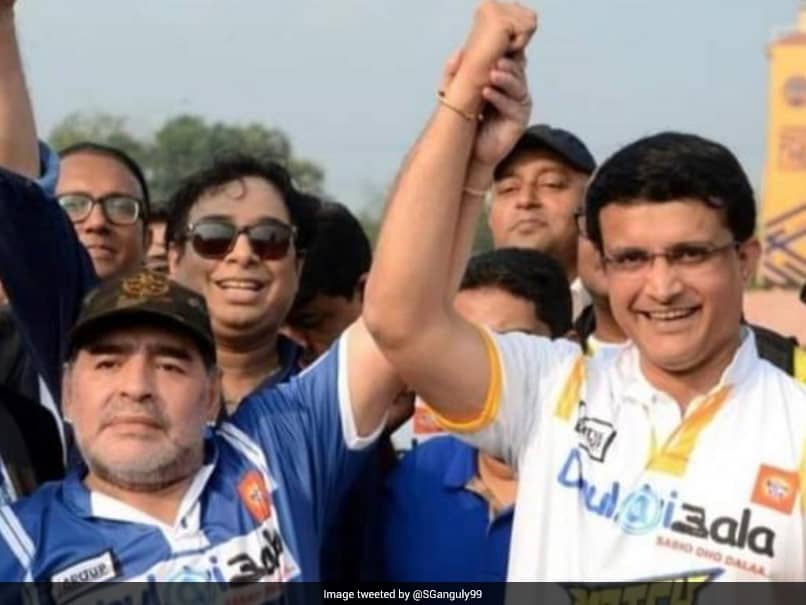 Sourav Ganguly shared a picture of him with Diego Maradona.© Twitter

Former India captain and current President of the Board of Control for Cricket in India president Sourav Ganguly paid tribute to football legend Diego Maradona, who died of a heart attack at 60 in Argentina on Wednesday. "My hero no more ..my mad genius rest in  peace ..I watched football for you..," Ganguly tweeted. Renowned as one of the greatest footballers of all time, the Argentine World Cup winning captain died of a heart attack, having undergone brain surgery earlier this month, a member of his entourage told AFP.

My hero no more ..my mad genius rest in peace ..I watched football for you.. pic.twitter.com/JhqFffD2vr

Football and the world of sports has lost one of its greatest players today. Rest in Peace Diego Maradona! You shall be missed," he tweeted.

Football and the world of sports has lost one of its greatest players today.
Rest in Peace Diego Maradona!
You shall be missed. pic.twitter.com/QxhuROZ5a5

Several others from the cricketing fraternity also took to social media to mourn the legendary footballer.

Really sad to hear of the passing away of the legendary Maradona. He truly lived life king size & by his rules and set benchmarks on the field and off it too. RIP my friend. You will be missed

I was among the scores of fans of his game, and so this comes as a big shock! My condolences to Diego Maradona fans all over the world. RIP legend.

It was the Hand of God once again, this time forever. The Legend shall live on. #RIPMaradona pic.twitter.com/I1XzRa20aY

The sporting world has lost one of its greatest of all time.

The Hand of God is now resting closer to him than ever before #RIPMaradona pic.twitter.com/iEJ7SrjX8u

Taken away too soon by 'The Hand of God'

Rest in peace El Pibe de Oro. You're gone but the delightful memories you left us with will remain etched in our hearts!

In 2000, world football authority FIFA ran an online Player of the Century poll. Maradona gained 54 percent of the vote, Pele was second with 18 percent. FIFA declared them joint winners.

Maradona married his long-time girlfriend Claudia Villafane in 1984. They had two daughters, Dalma and Gianinna, and divorced in 2004.

He also had a son, Diego Junior, born in Naples in 1986, although he only acknowledged paternity in 2004.

With inputs from AFP

Argentina Sourav Ganguly Cricket Football
Get the latest updates on India vs Australia Series, check out the India vs Australia Schedule for 2020-21 and Ind vs Aus live score . Like us on Facebook or follow us on Twitter for more sports updates. You can also download the NDTV Cricket app for Android or iOS.