Cristiano Ronaldo's captain's armband that he flung to the ground in disgust after Portugal were controversially denied a late winner in the World Cup qualifier against Serbia was put on auction on Tuesday in a bid to help a six-month-old baby suffering from a rare disease. 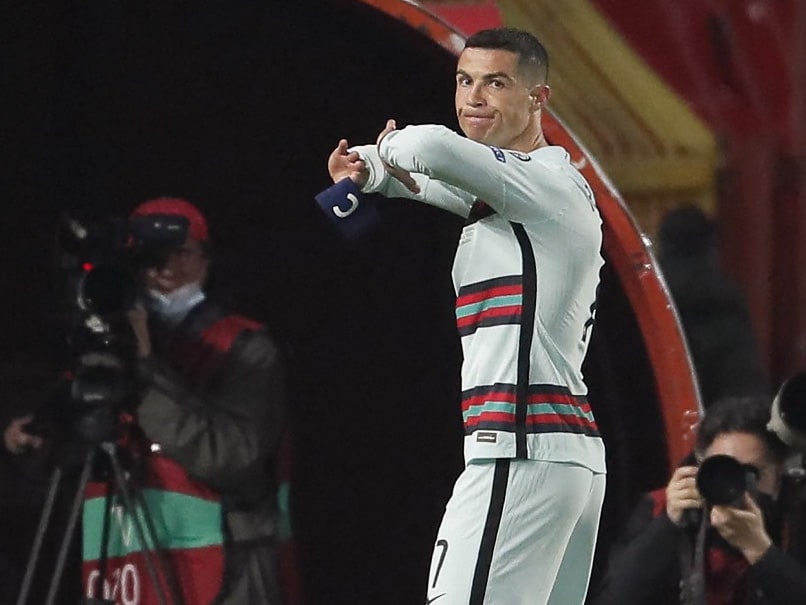 Cristiano Ronaldo was booked for his protests and he threw his captain's armband to the ground.© AFP

The captain's armband that Cristiano Ronaldo flung to the ground in disgust after Portugal were controversially denied a late winner at the weekend in the World Cup qualifier against Serbia was put on auction on Tuesday in a bid to help a sick child.

With the scores level at 2-2 in Belgrade, Ronaldothought he had scored the crucial goal in stoppage time when the ball appeared to cross the goalline before Stefan Mitrovic cleared.

But without technology in use, the goal was not awarded.

A fuming Ronaldo was booked for his protests and at the final whistle, as he left the pitch, he threw his captain's armband to the ground.

One of the stewards at the stadium picked it up and immediately contacted a regional sports channel with the idea of auctioning it for charity.

The man, who requested anonymity, told AFP he suggested raising funds required to treat a six-month-old baby, Gavrilo Djurdjevic, who is suffering from a rare disease.

"He (Ronaldo) threw the armband three metres away from me, and the idea immediately occured to me that this (sale) could be a good opportunity," the man told AFP by phone.

"I realised we had some attention and could do something nice for Gavrilo", he added.

After the sports channel Sportklub verified the item's authenticity by checking post-match photos and videos, they teamed up with a charity organisation and put Ronaldo's armband up for a bidding contest on auctioning website Limundo.com.

"I hope we will be able to reach Ronaldo himself... so we could help Gavrilo as much as we can," Branislav Jocic, social media manager of Sportklub told AFP.

The infant is suffering from spinal muscular atrophy (SMA), which affects about one in 10,000 births, and results in death or the need for permanent ventilation by the age of two in 90 percent of cases.

His hope is pinned on a one-time gene treatment Zolgensma, also known as the "world's most expensive drug", which would cost more than two million euros ($2.35 million).

Only hours after being put on auction, early Tuesday afternoon, the armband had reached the price of 360,000 dinars (around 3,000 euros) -- donations can also be made direct to the charity.

Cristiano Ronaldo Football
Get the latest updates on IPL 2021, check out the IPL 2021 Schedule and Indian Premier League Live Score . Like us on Facebook or follow us on Twitter for more sports updates. You can also download the NDTV Cricket app for Android or iOS.