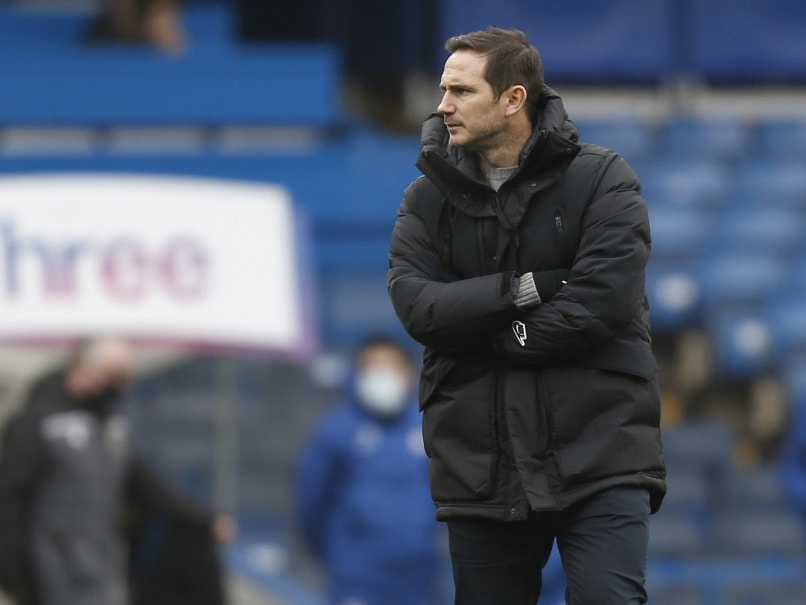 Frank Lampard believes players will have to curb natural instincts to celebrate.© AFP

Frank Lampardhas revealed he will tell his Chelsea stars not to celebrate in training amid fears group hugs could spread the coronavirus. Premier League chiefs have warned players to halt celebrations to comply with strict Covid-19 protocols following the virus spike in Britain. Chelsea manager Lampard believes players will have to curb natural instincts to celebrate after they score in matches. He plans to work on less hands-on celebrations in training in a bid to change his team's mindset on the issue.  Asked if Chelsea will stop themselves from celebrating during training, Lampard said: "Yes, maybe we will. In all seriousness, we practice social distancing as much as we can at the training ground.

"On the pitch it can be difficult at times clearly, because you have to train and get close to each other.

"But every moment you possibly can and in training I suppose the instinct or the moment shouldn't grab you as much, let's hope, as it would do in-game when you're scoring in the Premier League that wins a game or whatever.

"So for sure it's something I will pass on to the players, and you see a lot of these group hugs now when they win a five-a-side (in training) so that will be something we'll look at."

Premier League players have come under heavy scrutiny for continuing to celebrate goals this week.

The league's director of football Richard Garlick will reportedly give a presentation which warns players must try to stop mass celebrations, handshakes, high fives and shirt swaps during the crackdown on protocols.

Several Premier League, FA Cup and lower league matches have been postponed in recent weeks due to virus outbreaks at clubs.

Manchester City, Newcastle, Aston Villa and Fulham are among the top-flight teams to have been hit by Covid problems.

Lampard conceded footballers have to guard against breaking virus protocols after a host of players were seen at gatherings over Christmas and the New Year.

"My opinion is as across the spectrum of society is that some footballers have made mistakes, which some have admitted to when they have been found out and that's wrong," Lampard said.

"Some politicians have also made mistakes that when they've been caught out they've admitted to, so I certainly don't think the spotlight should just be on footballers.

"On the other side of that, I think footballers have to understand their responsibility and now that a few mistakes have been made you hope we see less of that."

Chelsea Frank Lampard English Premier League Football
Get the latest updates on ICC T20 Worldcup 2022, check out the Schedule and Live Score. Like us on Facebook or follow us on Twitter for more sports updates. You can also download the NDTV Cricket app for Android or iOS.