Bundesliga: Manuel Neuer bounced back after conceding six goals in Germany's crushing defeat by Spain in midweek with two brilliant first-half saves in quick succession for Bayern Munich, who drew to Werder Bremen. 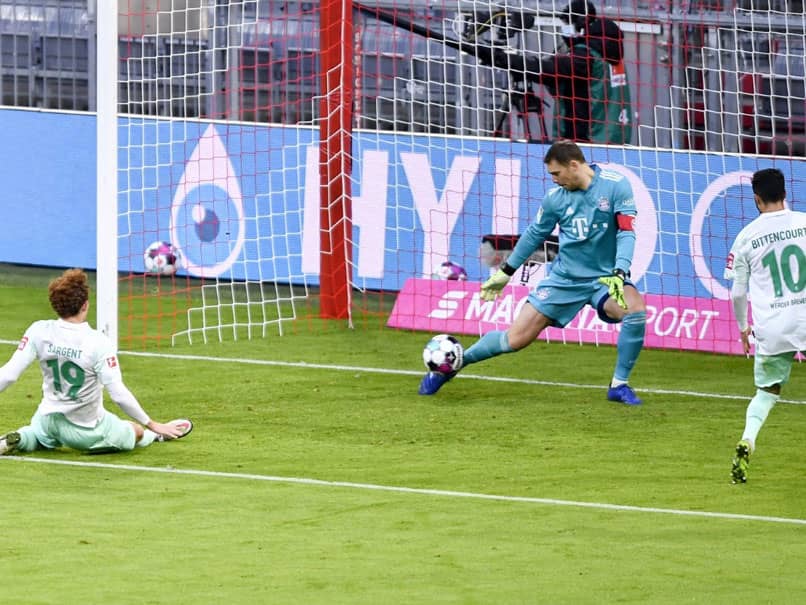 European champions Bayern Munich remained top of the Bundesliga despite being held on Saturday to a 1-1 home draw by Werder Bremen, who were only denied a shock win by a string of excellent saves from Manuel Neuer. Germany goalkeeper Neuer produced great stops to twice deny US forward Josh Sargent as Bremen earned their first point at Bayern for a decade. "We had to invest a lot," Neuer told Sky. The 34-year-old bounced back after conceding six goals in Germany's crushing defeat by Spain in midweek with two brilliant first-half saves in quick succession.

He used a boot to block a Sargent shot, then lunged across goal to save from Ludwig Augustinsson.

In the dying stages, Neuer then stood tall to block a shot by Sargent, who had broken clear.

Bayern coach Hansi Flick was far from pleased that Bremen took the lead in his 50th game in charge, saying his team "have to defend better".

Bremen deservedly went ahead just before half-time when midfielder Maximilian Eggestein finished off a superb attack.

Kingsley Coman equalised in the 62nd minute at the Allianz Arena by meeting a Leon Goretzka cross at the far post.

Bayern forward Eric Maxim Choupo-Moting fired over with the goal at his mercy five minutes from time.

However Neuer's heroics at the other end preserved the draw to leave Bayern one point clear of Bayer Leverkusen at the top of the table.

Third-placed RB Leipzig can draw level on 19 points with defending champions Bayern if they beat Eintracht Frankfurt later on Saturday.

A day after his 16th birthday, Youssoufa Moukoko could become the youngest player in Bundesliga history if he plays for Borussia Dortmund at Hertha Berlin.

Leverkusen climbed to second with a 2-1 win at strugglers Arminia Bielefeld thanks to Aleksandar Dragovic's late winning goal.

The win was a relief for Leverkusen goalkeeper Lukas Hradecky, who scored a horrific own goal early in the second half.

Leverkusen were 1-0 up thanks to a Leon Bailey goal when Hradecky sliced a clearance, which rolled into the empty net behind him.

Despite having seven players quarantined with the coronavirus, Hoffenheim's depleted squad drew 3-3 at home with Stuttgart.

Hoffenheim striker Andrej Kramaric converted a late penalty for his seventh goal in four league games to put the hosts 3-2 ahead.

However, in the fourth minute of added time, Stuttgart defender Marc-Oliver Kempf fired the ball through the legs of Hoffenheim's Stefan Posch to grab an equaliser.

Schalke's winless run stretched to 24 league games, dating back to January, after losing 2-0 at home to Wolfsburg.

Dutch striker Wout Weghorst and midfielder Xaver Schlager scored Wolfsburg's goals which moved them up to fifth, with Schalke remaining second from bottom.

Augsburg played the last half-hour a man down as Raphael Framberger was sent off after receiving two yellow cards within 12 minutes of coming on.

With time almost up, Caliguiri's volley went in off the crossbar to snatch a point.

Bayer Leverkusen Manuel Neuer Football
Get the latest updates on IPL 2021, IPL Points Table , IPL Schedule 2021 , live score . Like us on Facebook or follow us on Twitter for more sports updates. You can also download the NDTV Cricket app for Android or iOS.