Barcelona started the day at the top of the pile and then Atletico Madrid enjoyed a couple of hours at the summit after edging past Real Betis. 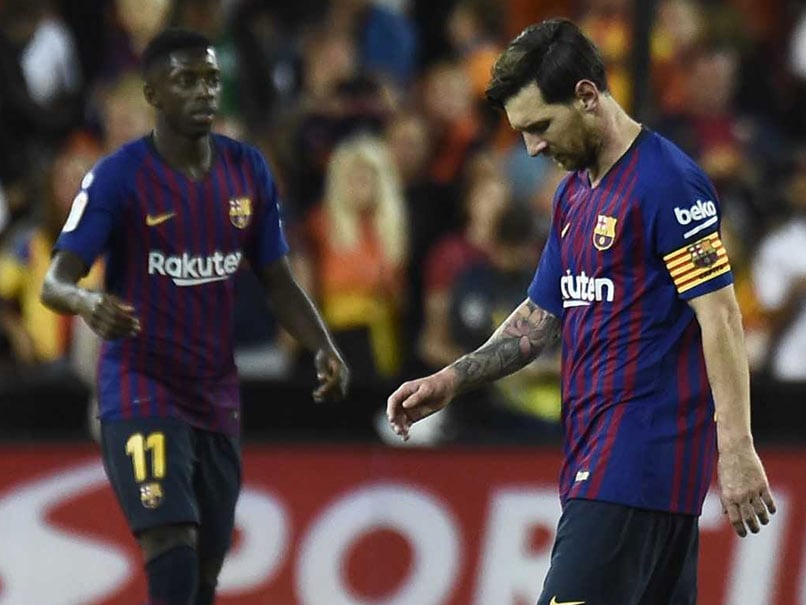 Sevilla are the surprise leaders in La Liga after Lionel Messi could only rescue a draw for Barcelona away to Valencia on Sunday. Barca started the day at the top of the pile and then Atletico Madrid enjoyed a couple of hours at the summit after edging past Real Betis at the Wanda Metropolitano. Sevilla, however, usurped them both by beating 10-man Celta Vigo and Barcawereunable to reclaimthe lead in the late kick-off, held by Valencia to a 1-1 draw at the Mestalla. It means Ernesto Valverde's side are a point behind Sevilla and without a league victory now in four matches, a dip that comes in stark contrast to their enthralling triumph over Tottenham in the Champions League on Wednesday.

Messi, mesmeric at Wembley, was on target again, his driven shot into the corner cancelling out a bizarre opener for Valencia, scored after just 78 seconds.

Ezequiel Garay claimed the final touch but Daniel Parejo's corner had been flicked on by Geoffrey Kondogbia, missed by Thomas Vermaelen and skimmed through off Gerard Pique's back.

Philippe Coutinho should have won it for Barcelona in the second half but took too long to pull the trigger and Jose Gaya was able to make the block.

"When we don't win we always think of it as two points lost," Valverde said.

"After Leo's goal, we tried everything but they defended well and we couldn't get the goal we wanted."

For Valencia, now unbeaten in six, this was another step in the right direction, even if they are finding it difficult to turn draws into wins. They move up to 14th.

"Leaving Barca for 90 minutes practically without a chance means that we have worked very well," Valencia coach Marcelino said.

Atletico and Sevilla's success also pushed struggling Real Madrid down to fourth. Julen Lopetegui's side endured a shock defeat away by Alaves on Saturday.

For all the talk of crisis at the top two clubs, however, this was Sevilla's day.

Pablo Sarabia headed in to open the scoring at the Ramon Sanchez Pizjuan before Celta defender Nestor Araujo was sent off for picking up two yellow cards in as many minutes.

Wissam Ben Yedder doubled the lead and while substitute Sofiane Boufal pulled one back for Celta, it proved too little to late. The victory is Sevilla's fourth on the bounce in the league.

"At the the moment we are playing with a lot of confidence," Ben Yedder said. "We are showing we can be consistent."

Atletico had earlier continued their own strong run after Angel Correa's goal proved decisive in an untidy 1-0 win over Real Betis.

Atletico sat seven points behind Real and Barca after winning only one of their opening four league games but as their rivals have stumbled, Diego Simeone's side have sprung into form.

"We look at everything quietly and continue to improve," Simeone said. "We have grown."

Simeone can take some of the credit too for the latest victory, after throwing on both Correa and Thomas Partey as substitutes in the second half. Thomas provided the assist.

"When the players respond, the coaches look better," Simeone said. "The teams that challenge up the top of the table are there because of the players they can bring off the bench."

The contest was billed as a classic clash of styles, with Atletico's stubborn defence up against the free-flowing Real Betis, who lit up the league last season with their flurry of goals.

"A great coach once said, the best Plan B is always to do Plan A better," said Betis coach Quique Setien.

They could also have gone top with a win, such is the scrunched nature of the top half, but instead Betis slip to eighth.

"We have less points than our performances deserve," Setien added.