Watch: Arsenal Score One Of The Best Team Goals Ever

Arsenal's third goal was one of the best team goals scored in the Premier League this season. 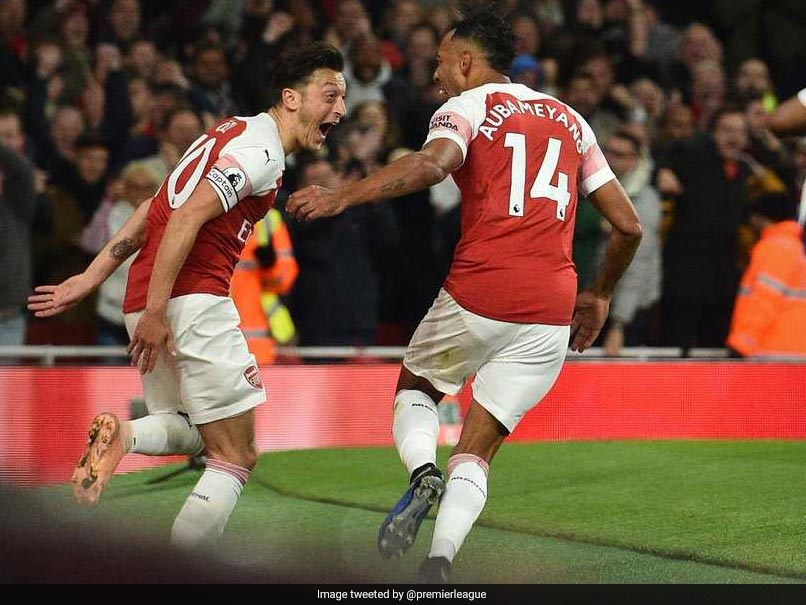 Arsenal stretched their unbeaten run in all competitions to ten after beating Leicester City 3-1 in the Premier League match on Monday. Mesut Ozil produced one of the best midfield displays in the league this season as the Gunners continued their resurgence under new manager Unai Emery. All the three goals Arsenal scored were fabulous but what caught everyone's attention especially on social media was that of the third goal. Gabon international Pierre-Emerick Aubameyang's second goal followed one of the moves of this season. Ozil's audacious flick in midfield set it in motion before a wonder of an assist by the German gave Aubameyang a simple finish.

what a goal aubameyang pic.twitter.com/9PG1mwHNhB

Aubameyang Goal vs Leicester City
That pass from OZIL though!! pic.twitter.com/ZWH1HVmtW4

Ozil, shrugging off his poor start to the season, had equalised just before half-time and played a key role in Aubameyang's second-half double. Leicester had taken a lead through a Hector Bellerin own goal in the first half.

Gabon striker Aubameyang scored twice in quick succession after coming off the bench, ensuring Arsenal won 10 consecutive matches in all competitions for the first time since 2007. They have scored 30 goals in that blistering streak and climb to fourth place in the Premier League, just two points behind leaders Manchester City and second-placed Liverpool.

Arsenal host Sporting Lisbon in the Europa League on Thursday and they travel to Crystal Palace to resume their Premier League duties on Sunday. Leicester City will host West Ham United on Saturday in the Premier League.

Leicester City Mesut Ozil Pierre-Emerick Aubameyang Football
Get the latest updates on ICC Women's Cricket World Cup 2022 and IPL 2022, check out the Schedule , Live Score and IPL Points Table. Like us on Facebook or follow us on Twitter for more sports updates. You can also download the NDTV Cricket app for Android or iOS.