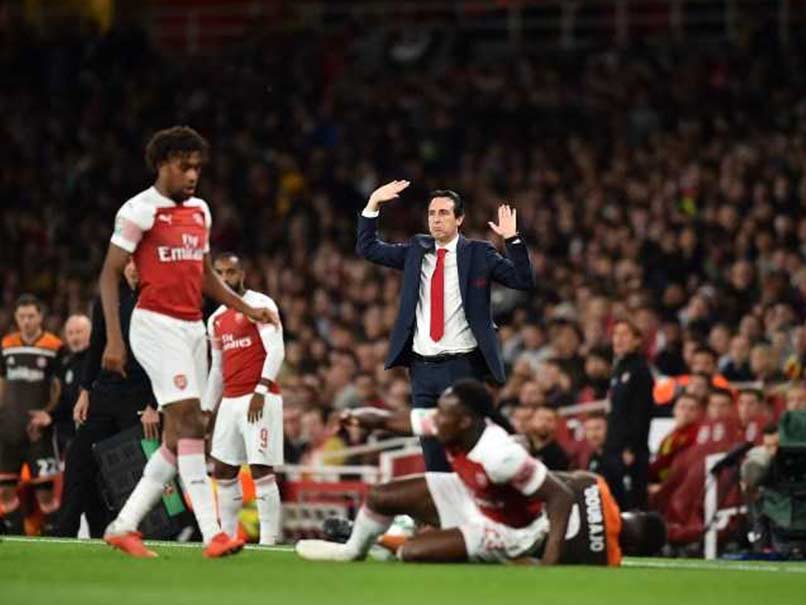 Unai Emery will be forced to rotate his side heavily with Arsenal facing a packed schedule.© AFP

Unai Emery admits Arsenal will struggle to cope with a draining schedule that sees them host Leicester City at the start of three games in seven days. Emery's side will be pushed to the limit by the television schedulers, who moved their Premier League clash with the Foxes to Monday evening at the Emirates Stadium. The Gunners then travel to Portugal for a Europa League tie against Sporting Lisbon on Thursday before returning to domestic action at Crystal Palace on Sunday. In contrast, Sporting were due to face Loures on Saturday night, giving them more time to recover before hosting Arsenal.

Emery has fielded a strong side in Arsenal's previous Europa League matches, but he will be forced to rotate more heavily this time.

"We are one team with a very high level and very high demand for us," he said.

"Every player, they need to feel they can play every match. With only three days difference between one match and another, you can't do that.

Arsenal are on a nine-match winning streak in all competitions, but their chances of extending that run past the coming week will be severely tested.

Emery acknowledges the television rights holders can determine when his team play, but he wishes they showed more common sense.

"We are first in one competition (the Premier League) and the TV is very important," he said.

"The TV has the target to choose the matches Friday, Sunday, Monday. If they decided we are going to play Monday we don't stop to think if it is better to play Monday or not.

"I prefer to play Saturday or Sunday. It (playing on Monday) has the advantage for more time to prepare the match - that's one positive.

Lacazette endured a difficult first season with Arsenal, but has five goals in 10 games this term.

Puel, who gave Lacazette his senior debut in 2010 when they were together at Lyon, said: "He is a complete player with good transition with the ball and without the ball. He is always available for the team.

"He works all the time and he has kept his clinical edge and I am not surprised about his quality and his good work with Arsenal.

"He started with me. His first game at the beginning he was always a striker but to find a place and get game time in the team he started as a winger.

"He had always the same quality and was clinical in the box."

Crystal Palace English Premier League Football
Get the latest updates on ICC T20 Worldcup 2022, check out the Schedule and Live Score. Like us on Facebook or follow us on Twitter for more sports updates. You can also download the NDTV Cricket app for Android or iOS.