Meanwhile, seven-time winners AC Milan face Dutch runners-up PSV Eindhoven -- a rematch of the 2004-05 semi-final which the Italians won on away goals -- while French side Lyon will play Real Socieded of Spain. 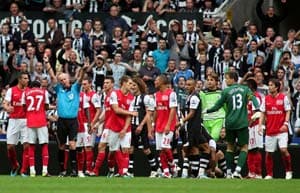 English Premier League side Arsenal were handed a tricky tie against Turkish giants Fenerbahce in the Champions League play-off round after the draw was made on Friday at UEFA's headquarters in Nyon.

The Gunners, who reached the 2006 final where they lost 2-1 to Barcelona, will travel to Istanbul for the first leg to be played August 20-21 before returning to London for the second leg, scheduled for August 27-28.

Fenerbahce's potential participation in the group stage though depends on a ruling from the Court of Arbitration for Sport, expected at the end of the month, having been banned from European competition by UEFA for match-fixing in domestic competition.

Meanwhile, seven-time winners AC Milan face Dutch runners-up PSV Eindhoven -- a rematch of the 2004-05 semi-final which the Italians won on away goals -- while French side Lyon will play Real Sociedad of Spain.

German outfit Schalke were paired with Ukraine's Metalist Kharkiv, who face a UEFA hearing into match-fixing claims next Tuesday that could determine whether they are eligible to take part in the competition.

In the champions route, Scottish title-holders Celtic were drawn against Shakhter Karagandy, which will see Neil Lennon's men make a 4,000-mile (6,400-kilometre) trip to Kazakhstan.

Draw for the Champions League play-offs, which was made on Friday:

Note: The participation of Fenerbahce and Metalist is subject to pending disciplinary and Court of Arbitration for Sport (CAS) proceedings

Ricky Ponting Reveals How He Got His Nickname "Punter"
Advertisement