Luis Suarez scored the winner in the 89th minute in front of nearly 99,000 people, who packed the stands to see new signings Antoine Griezmann and Frenkie De Jong. 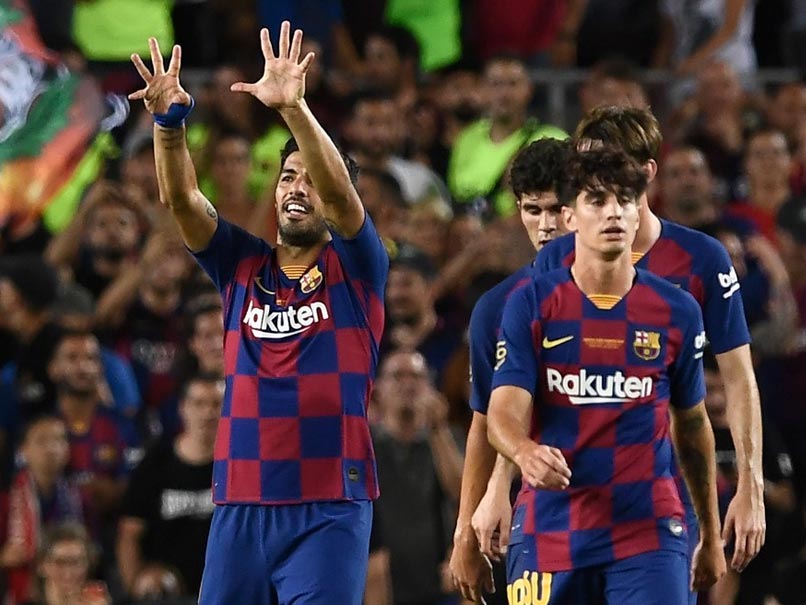 Luis Suarez's late volley saw Barcelona to a 2-1 win in the Joan Gamper Trophy friendly in front of a bumper crowd at the Camp Nou, as Antoine Griezmann made his home debut following his big money move from Atletico Madrid. Luis Suarez flashed home Sergi Roberto's lofted pass in the 89th minute in front of nearly 99,000 people, who packed the stands to see new signings Antoine Griezmann and Frenkie De Jong, with his strike and Ainsley Maitland-Niles' comical own goal cancelling out Pierre-Emerick Aubameyang's fine first half opener.

"It was an entertaining game, the atmosphere was great and it was a privilege to reunite with our fans," said Barcelona coach Ernesto Valverde.

"I think we did well, but perhaps in the first half we lacked a bit of rhythm."

Barcelona are aiming for European glory this campaign after suffering Champions League humiliations against Roma and Liverpool the last two seasons.

Before the match captain Lionel Messi addressed those defeats -- which saw Barcelona throw away comfortable first-leg leads before being dumped out -- in a speech to the crowd.

However, Lionel Messi didn't take the field and it was left to his long-time strike partner rather than the new boys to see off the Gunners after a powerful second half display.

Antoine Griezmann Pierre-Emerick Aubameyang Football
Get the latest updates on ICC T20 Worldcup 2022 and CWG 2022 check out the Schedule, Live Score and Medals Tally. Like us on Facebook or follow us on Twitter for more sports updates. You can also download the NDTV Cricket app for Android or iOS.