Chelsea registered a 2-1 victory against Barcelona on Tuesday in an exhibition match in Japan. 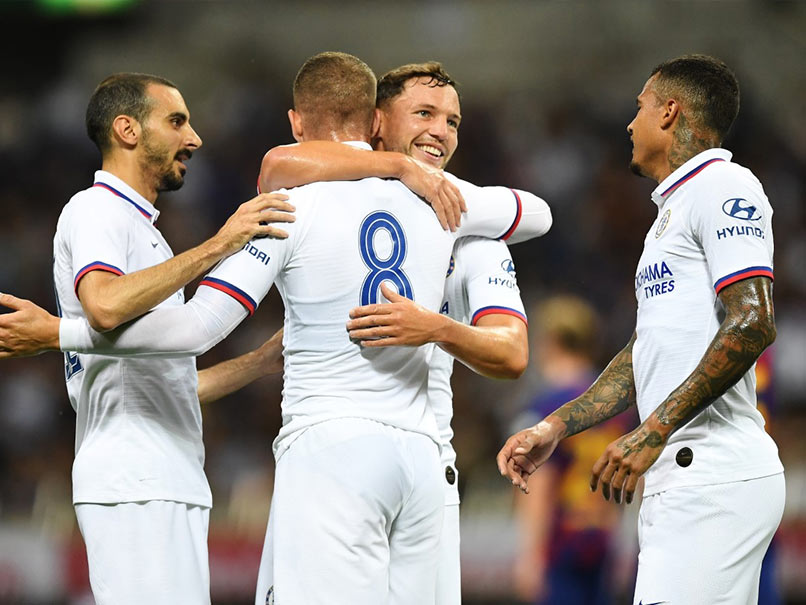 Chelsea coach Frank Lampard was all praise for his young striker.© AFP

Goals from Tammy Abraham and Ross Barkley saw Chelsea grab a 2-1 victory against Barcelona on Tuesday in an exhibition match in Japan. World Cup-winning French striker Antoine Griezmann and former Ajax midfielder Frenkie de Jong made their unofficial debut for the Spanish giants, pleasing some 51,126 fans who cheered every move during the star-studded game. Chelsea striker Abraham opened the scoring in the 34th minute by pouncing on a mistake by Barcelona midfielder Sergio Busquets who attempted to clear the ball.

But with Chelsea midfielder Jorginho applying pressure, the ball rolled towards Abraham who only had to step past rushing goalkeeper Marc-Andre ter Stegen and gently send it into the net.

Chelsea coach Frank Lampard was all praise for his young striker.

"Tammy, he is a goal scorer. He is hungry for goals," he said.

Despite facing a transfer ban, Lampard said Chelsea's two-game tour in Japan showed he had a "competitive" and "determined" team.

"What I have learned about players was that they are a good strong group, a determined group. I am very happy," he said.

"There is more work to do but it's been a good trip. It's been positive in all senses," he said.

Minutes after the first goal, Chelsea midfielder Christian Pulisic showed off his speed and footwork to infiltrate the Barca defence, but his left footer went just wide.

Barcelona went on the offensive in the second half, with substitute striker Carles Perez leading the way.

In the 55th minute Perez zipped past three Chelsea defenders but his left toe kick finish was not good enough to get past Arrizabalaga.

A few minutes later, he dashed deep into the left side to feed a high-speed cross to striker Malcom, but Arrizabalaga again denied them.

- 'Dangerous' Griezmann -
Chelsea made it 2-0 with less than 10 minutes left as midfielder Barkley picked up a cross in front of the box and curled it into the net, with substitute keeper Neto getting a touch but unable to block it.

Just before injury time, Barcelona got a free kick just outside the box but midfielder Ivan Rakitic's shot went above the bar.

Rakitic however quickly redeemed himself in injury time, picking up a cross and firing a lightning right footer that went deep into the net for a consolation goal for Barcelona.

Barca coach Ernesto Valverde, echoing Lampard, said the match was a good test that showed signs of excellence as well as areas to improve.

Valverde was tightlipped about whether they were moving to acquire Neymar from French side Paris Saint-Germain.

But he has high hopes for Griezmann, whose 120 million euro ($135 million) transfer was contested by Atletico.

Griezmann "needs to get used to the team and how we play".

"But he proved himself as a dangerous player on the ball. He has a lot of ideas," Valverde said through a translator.

"This is only his debut game. He will have to fit into Barca's style. I am sure he will become better and better."

Griezmann said he hoped to shine at his new club.

"Personally, I want to play in many games, score more goals than the last season, more assists than last season," he said through a translator, adding that he had his eye on a "big title."

Chelsea Ross Barkley Football
Get the latest updates on Fifa Worldcup 2022 and check out  Fifa World Cup Schedule, Stats and Live Cricket Score. Like us on Facebook or follow us on Twitter for more sports updates. You can also download the NDTV Cricket app for Android or iOS.