Manchester City fired the first shot in their battle for supremacy with rivals Liverpool as they snatched the Community Shield with a 5-4 penalty shoot-out win. 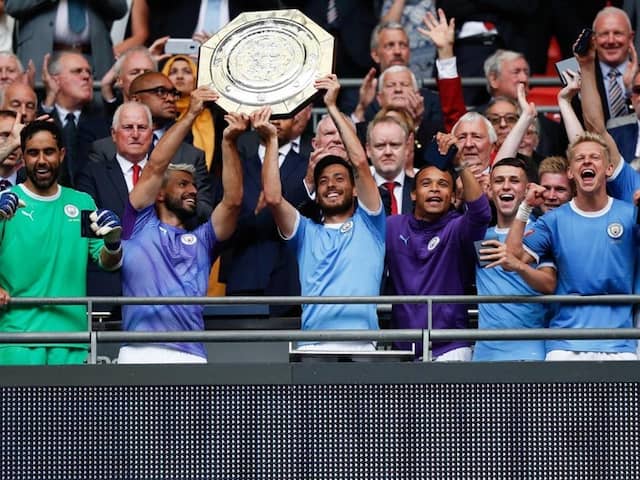 Pep Guardiola believes Manchester City's Community Shield triumph against Liverpool was the perfect preparation ahead of this season's duel for supremacy between the Premier League rivals. Guardiola's side drew first blood on the eve of the new campaign with a 5-4 penalty shoot-out success after a 1-1 draw in the annual curtain-raiser to the English top-flight season. Sunday's prestigious friendly at Wembley showed there is virtually nothing to separate the two teams after City pipped Liverpool to the Premier League crown by one point last term.

While City swept the board with an unprecedented domestic treble last season, Liverpool recovered by winning their sixth European Cup.

Aware of the serious threat posed by Liverpool, City's celebrations when Jesus stroked in the winning penalty showed how much they relished the opportunity to inflict an early psychological blow on their rivals.

Jurgen Klopp's side could easily have won in normal time but for a superb display from Bravo and Kyle Walker's incredible overhead-kick off the line, leaving Guardiola to admit the Reds will again present the main obstacle to his club's ambitions.

"There are two real contenders, Liverpool and us, to win the Premier League. (Manchester) United with (Harry) Maguire and the other players they bought, Arsenal, Chelsea and Tottenham can be there," Guardiola told reporters.

"Maguire is an excellent, top-class player. We were interested but we could not afford it.

"In the beginning of the season there are five or six contenders. Then the season will talk.

"I think it will be us and Liverpool, so it is good to see the team we will compete with, the champions of Europe.

"They are a top-class team, the difference is minimal, one point last season and one penalty today.

"That's why it's good to play them, to say 'guys this is the team we have to compete against. That is what we have to prepare for."

'The hunger is there'

With a 10-month war of attrition looming as City try to defend the domestic trophies and wrestle the Champions League away from Liverpool, Guardiola was encouraged with the way his team dominated in the first half.

"The hunger is there for this part of the season. The game was tremendously demanding. We had a really good first half but after that we couldn't control the switch of play, the long balls," he said.

"For this part of the season that is normal. The calendar is crazy with the Copa America and the African Cup."

Guardiola eased fears Leroy Sane suffered a serious injury when City's Germany winger -- a transfer target for Bayern Munich -- limped off in the first half.

"The first impression was not good but I think it is not that. Honestly I don't know, it is for the doctors. I will wait to see what the doctors say but I think he will be ok," Guardiola said.

While Liverpool finished a difficult pre-season -- including several defeats and the delayed return of their top stars from international duty -- Klopp said his side's dominant second half performance showed they will be a thorn in City's side.

"I'm completely happy about it. No team plays like City. You saw in a few moments that we struggled positioning-wise when they do what they can do," he said.

"But we changed a few things and in the second half of course it is about will, no-one felt tired any more and I like that a lot."

Klopp has grumbled about Liverpool having to kick off the Premier League season against Norwich on Friday, while City open at West Ham on Saturday.

But he made it clear there are no excuses as Liverpool chase a first English title since 1990.

"We will try everything. The boys looked pretty hungry. We fought today. Both teams wanted to win desperately," he said.

"My team is not in doubt about being satisfied. They haven't stopped working or running."

Joel Matip Pep Guardiola Jurgen Klopp Football
Get the latest Cricket news, check out the India cricket schedule, Cricket live score . Like us on Facebook or follow us on Twitter for more sports updates. You can also download the NDTV Cricket app for Android or iOS.