UEFA Euro 2020: The cricketer shared a clip from the Wembley Stadium in London of Harry Kane's penalty against Denmark. 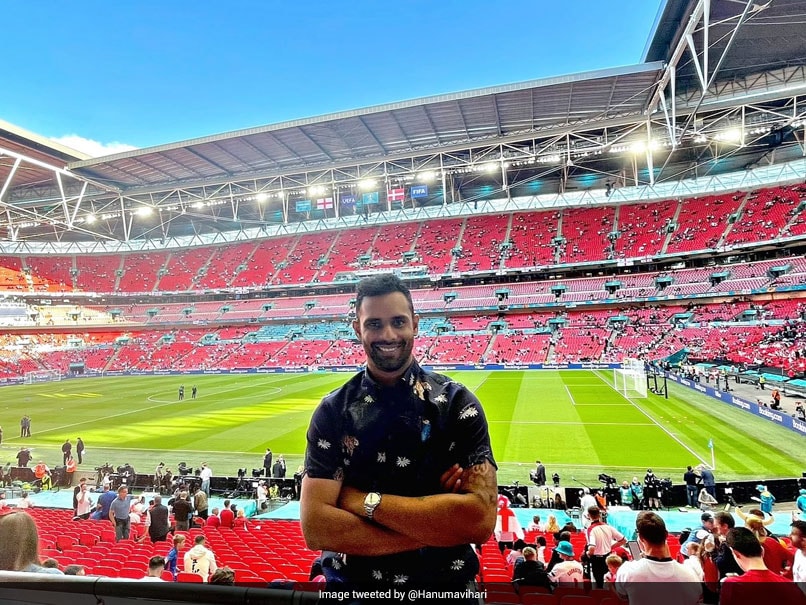 Hanuma Vihari was at Wembley for England vs Denmark Euro 2020 semi-final.© Hanuma Vihari/Twitter

Team India is currently enjoying a break following the conclusion of the inaugural World Test Championship (WTC) final. The Indian cricketers are making the most of their break from the bio-bubble by exploring the various tourist attractions of London. On Wednesday night, middle-order batsman Hanuma Vihari was spotted watching the Euro 2020 semi-final between England and Denmark at the Wembley Stadium in London. The Three Lions defeated Denmark 2-1 in the extra time to qualify for the UEFA European Championship 2020 final.

Vihari also shared a short clip from the match on his official Instagram account. "Unreal atmosphere!! England vs Denmark," he captioned the video.

In the footage, England skipper Harry Kane is seen taking a penalty shot. Kane's spot-kick was saved by Denmark goalkeeper Kasper Schmeichel. However, Kane found the goal with the rebound shot to send England into the final.

In another post, Vihari shared a photo of himself from the Wembley Stadium before the start of the match.

The comment section on Vihari's post was filled with mixed reactions from England as well as Denmark supporters.

Responding to his post, a fan extended his greetings to England on their victory. "CongratulationsEngland," he wrote.

Another fan insisted that Vihari had "witnessed a robbery".

You just witnessed a robbery

England will next take on Italy in the Euro 2020 final at Wembley Stadium on Sunday. It will be England's first major tournament final in 55 years. The last time, England had reached a final was way back in 1966, where they beat West Germany (4-2) to take the World Cup home.

In the past, Jasprit Bumrah and Rishabh Pant were among the other India cricketers spotted at the Wembley Stadium in London to watch Euro 2020 matches.

While Bumrah was seen enjoying the other semi-final clash between Italy and Spain along with his wife Sanjana Ganesan on July 7, Pant was spotted watching the round of 16 match between England and Germany on June 30.

The members of the Indian cricket team will return to field duties next month during Team India's five-match Test series against England. The upcoming red-ball series will also kick off the second World Test Championship.

Comments
Topics mentioned in this article
Hanuma Vihari Euro 2020 Cricket
Get the latest updates on IPL 2021, check out the IPL 2021 Schedule and Indian Premier League Live Score . Like us on Facebook or follow us on Twitter for more sports updates. You can also download the NDTV Cricket app for Android or iOS.