Zlatan Ibrahimovic led with his right elbow as he clattered into Mings while the duo challenged for an aerial ball just before half-time. 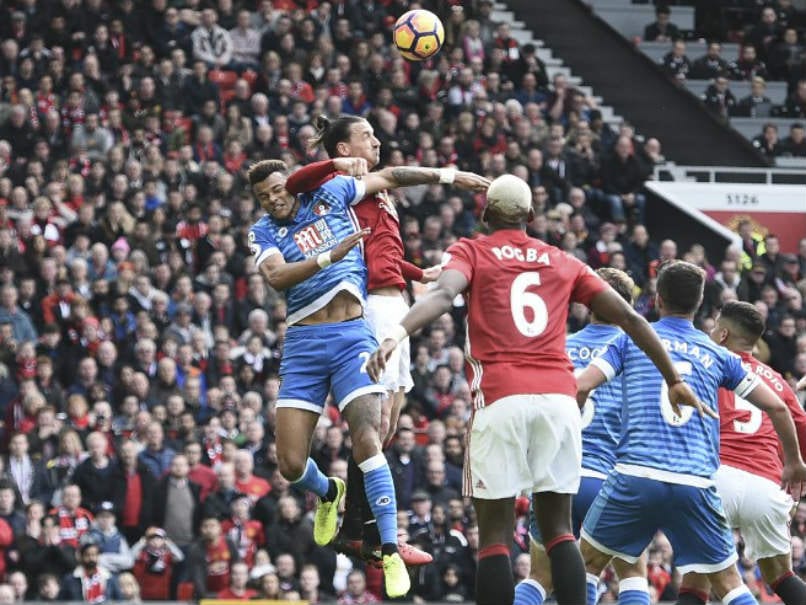 Zlatan Ibrahimovic clashes with Tyrone Mings as the duo vie for an aerial ball.© AFP

Manchester United were held to a 1-1 draw by 10-man Bournemouth in an ill-tempered Premier League clash at Old Trafford. Zlatan Ibrahimovic missed a crucial penalty that denied United three points that could have taken them into temporary fourth place in the standings. However, more importantly the Swedish striker escaped a red card after a vicious elbow on Bournemouth defender Tyrone Mings. In a stunning defence of what transpired, Ibrahimovic has claimed that Mings "jumped into" his elbow in the closing stages of the first-half.

The former Barcelona and Paris Saint Germain hitman led with his right elbow as he clattered into Mings while the duo challenged for an aerial ball just before half-time.

Ibrahimovic, who was already on a booking, avoided another caution as referee Kevin Friend decided instead to have a lengthy chat to the Man United striker.

"Listen, what happens on the field stays on the field. I'm not someone who attacks someone off the field," Ibrahimovic told the BBC at Old Trafford.

"You have the TV, you can see the images. I jump up and jump high and he (Mings) jumps into my elbow. It is not my intention to hurt someone."

Before the elbow incident, Mings had appeared to stamp on Ibrahimovic's head as he jumped over him and Ibrahimovic's elbow moments later seemed to be a form of retaliation.

"I didn't know about the stamping on the head. If it was him, it was him," said Ibrahimovic said.

Mings said he had not deliberately stamped on Ibrahimovic's head, having escaped punishment over the incident.

"Not at all. I would never do that. That's not in my game," he said. "Hard and fair is how I like to tackle, but off-the-ball stuff like that isn't part of my game."

If Friend writes in his match report that he did not see either of the incidents involving Ibrahimovic and Mings, the pair could face retrospective disciplinary action from England's Football Association.

The standard punishment for violent conduct in the Premier League is a three-game ban.

Comments
Topics mentioned in this article
Manchester United Bournemouth Zlatan Ibrahimovic Tyrone Mings English Premier League Football
Get the latest updates on ICC T20 Worldcup 2022 and CWG 2022 check out the Schedule, Live Score and Medals Tally. Like us on Facebook or follow us on Twitter for more sports updates. You can also download the NDTV Cricket app for Android or iOS.