Manchester City demolished Chelsea 6-0 to go top while Tottenham Hotspur cemented their third place with a 3-1 win over Leicester City. 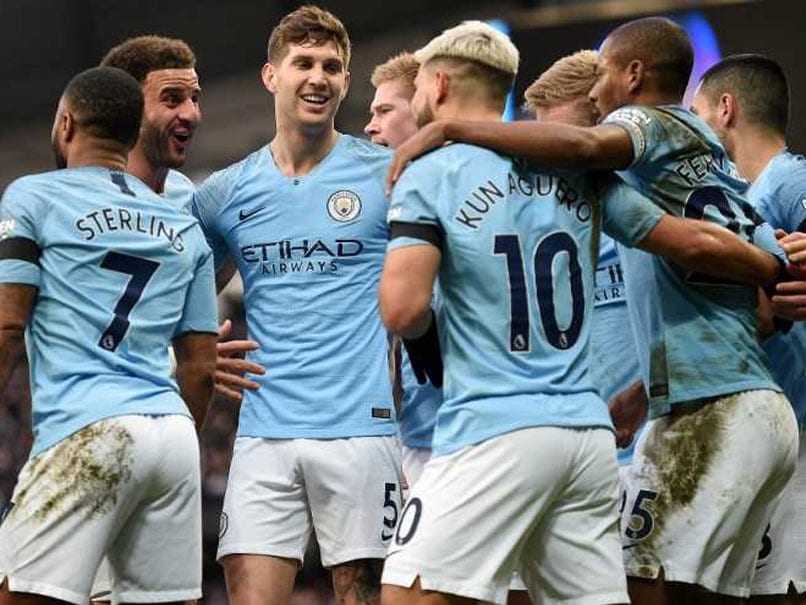 Sergio Aguero grabbed a hat-trick as Manchester City scored four times inside 25 minutes to thrash Chelsea 6-0 and leapfrog Liverpool again to top spot in the Premier League on goal difference on Sunday. Aguero should have had even more than three as the Argentine missed a glorious early chance and hit the bar in the second-half in a humiliating afternoon for Maurizio Sarri's men. Meanwhile, Mauricio Pochettino saluted Tottenham's fighting spirit as they kept alive their bid to gate-crash the Premier League title race with a 3-1 win over Leicester.

Pochettino's side took the lead through Davinson Sanchez's first goal for the club, but they were indebted to Hugo Lloris for saving Jamie Vardy's spot-kick after the interval at Wembley. Christian Eriksen netted moments later and although Vardy got one back, Son Heung-min's late strike ensured third-placed Tottenham clinched a fifth win in their last six league games.

In Manchester, Raheem Sterling started and ended the scoring and Ilkay Gundogan also netted in the first quarter of the game as City ended what could have been a testing week with a trip to Everton in between the visits of Arsenal and Chelsea with maximum points.

Jurgen Klopp's men maintain the advantage of a game in hand, but handed a reprieve by Liverpool's draws against Leicester and West Ham in recent weeks, City look determined to become the first side in a decade to retain the Premier League.

Chelsea on the other hand slip to sixth with the scale of the defeat sure to raise further doubts over Sarri's future.

A 4-0 defeat to Bournemouth in their last away game was Chelsea's heaviest league defeat since 1996.

And this was their worst loss in any competition since 1991 after failing to recover from Sterling's fourth-minute opener.

Eden Hazard went to sleep from Kevin de Bruyne's quickly taken free-kick and Bernardo Silva had acres of space to cross for the England international to fire home.

Pep Guardiola had described this match as a "final" for his side given that Chelsea had a week to prepare, while City ground out a 2-0 win at Everton on Wednesday.

Guardiola fell to the floor in exasperation when Aguero somehow side-footed wide with his easiest chance of the game moments later.

But the Catalan coach need not have worried that would prove a costly miss as Aguero made amends in stunning fashion by blasting into the top corner from 25 yards to double City's after just 13 minutes.

Aguero had a simple task to make it 3-0 six minutes later when he pounced on Ross Barkley's slack header towards his own goal.

And Gundogan's shot from the edge of the area then had too much power for the world's most expensive goalkeeper Kepa Arrizabalaga to compound Chelsea's woes.

Such was the defensive collapse at the other end, Gonzalo Higuain had little chance to shine but the Argentine striker was unfortunate not to score his third goal in as many league starts for Chelsea when Ederson turned over his dipping volley five minutes before the break.

That was as much of a response as Chelsea mustered, though, and it only got worse for Sarri's chances of keeping his job in the second period.

At Wembley, the win put Spurs five points off the top of the table as they try to catch pace-setters Liverpool and Manchester City.

While Tottenham are still outsiders to win their first English title since 1961, their ability to stay in contention, despite injuries to key players Harry Kane and Dele Alli suggests they shouldn't be completely written off.

This gritty success was the ideal preparation for hosting Borussia Dortmund in the Champions League last 16 first leg on Wednesday.

"Sometimes you can win games not playing your best. We conceded more chances than usual, but I think the victory is fair," Pochettino said.

"The effort was fantastic, with the circumstances that happened in this game and also this season. I'm so proud."

Puel has reportedly lost the support of several influential players, including England striker Vardy, who was left on the bench for the first 60 minutes before coming on to miss a penalty with his first touch.

Insisting he was happy for Vardy to take the penalty, Puel said: "I gave him the opportunity. I said if he felt good he could take it.

"Maybe it was not a good thing, but we had a lot of chances, not just with this penalty."

Sergio Aguero Raheem Sterling
Get the latest updates on IPL Auction 2023 and check out  IPL 2023 and Live Cricket Score. Like us on Facebook or follow us on Twitter for more sports updates. You can also download the NDTV Cricket app for Android or iOS.