Tottenham Hotspur do remain top of the table by a point, but could be usurped later on Sunday by Liverpool ahead of a clash between the two at Anfield on Wednesday. 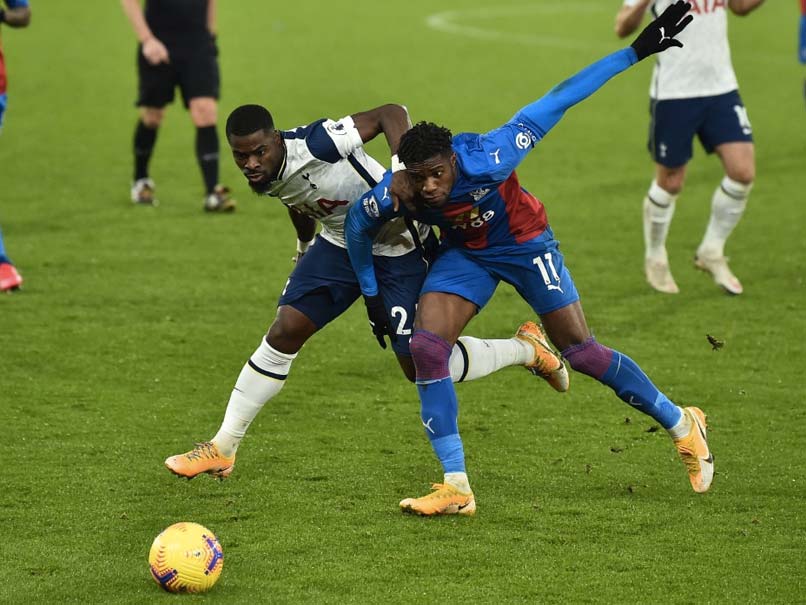 Jose Mourinho's men were punished for sitting on their lead after Harry Kane's goal.© AFP

Tottenham Hotspur wasted the chance to move three points clear at the top of the Premier League, as Jeffrey Schlupp's equaliser nine minutes from time earned a deserved 1-1 draw for Crystal Palace on Sunday. Spurs do remain top by a point, but could be usurped later on Sunday by Liverpool ahead of a clash between the two at Anfield on Wednesday. Jose Mourinho's men were punished for sitting on their lead after Harry Kane's long-range shot caught out Vicente Guaita, in the Palace goal on 23 minutes. Tottenham are now unbeaten in 11 league games, but will feel they let two points get away in their quest for a first league title in 60 years, as Guaita made amends with brilliant late stops to deny Kane and Eric Dier a winner.

Questions will be asked, though, of why the visitors took their foot off the gas for nearly an hour between the opener and Schlupp's equaliser.

Guaita's up and down day started well as the Spanish goalkeeper had produced another great save, low to his right from Tanguy Ndombele's shot.

Sergio Reguilon also curled just over on his weaker right foot on one of the many bursts forward from left-back, while Guaita also parried a Kane header from a corner.

However, Guaita was at fault as Kane's speculative long-range effort saw him wrong-footed for the England captain's 15th goal of the season.

An assist from Son Heung-min made it the 12th time Kane and Son have combined for a Premier League goal this season, already just one off the record tally set by Alan Shearer and Chris Sutton in Blackburn's title-winning campaign of 1994/95.

In true Mourinho fashion, Spurs then sat back to protect their lead and break out on the counter-attack.

The visitors were nearly punished just before half-time when Eberechi Eze's curling effort came back off the post.

Urged on by 2,000 fans inside Selhurst Park for the first time since March and under torrential rain, Palace continued to push after the break. However, the hosts only threatened from set-pieces.

Schlupp wasted a huge opening when he skewed well wide from close range as Spurs struggled to clear a free-kick, before Christian Benteke should have done better when he headed over when unmarked from a corner.

Palace's pressure was finally rewarded thanks to another goalkeeping error as Hugo Lloris failed to collect Eze's in-swinging free-kick, and Schlupp was in the right place to sweep the ball into the net for the first league goal, Tottenham have conceded in six games.

For the fourth straight league game, Gareth Bale was left on the bench for the full 90 minutes, as Mourinho instead sent on Dele Alli in search of a winner.

Spurs suddenly surged forward and only two outstanding saves from Guaita, denied them all three points as he firstly got down low to his left to parry Kane's header.

And deep into stoppage time, Guaita somehow reached Dier's free-kick that was heading for the top corner.

Crystal Palace Harry Kane Football
Get the latest updates on ICC T20 Worldcup 2022 and CWG 2022 check out the Schedule, Live Score and Medals Tally. Like us on Facebook or follow us on Twitter for more sports updates. You can also download the NDTV Cricket app for Android or iOS.