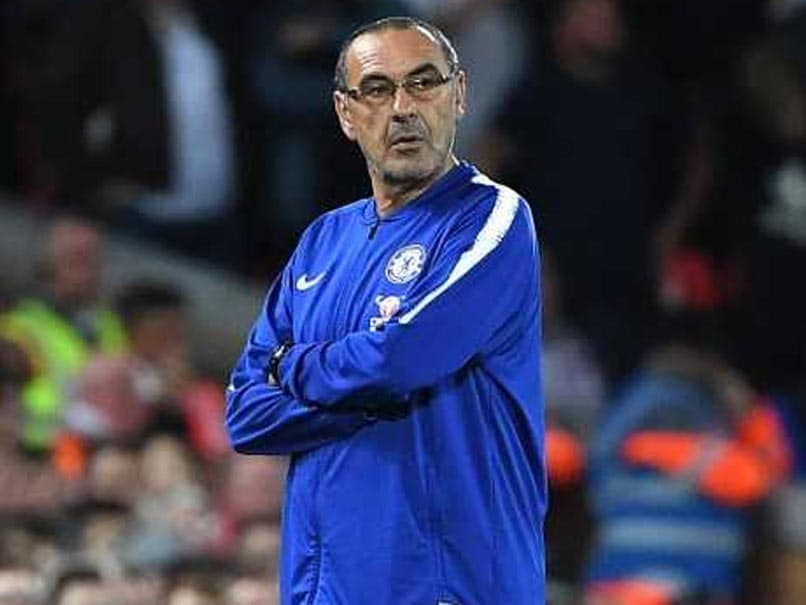 Maurizio Sarri said he knew he would face challenges at Chelsea despite a bright start to the season.© AFP

Maurizio Sarri said he knew he would face challenges at Chelsea despite a bright start to the season as he prepares his team to face Premier League leaders Manchester City on Saturday. Chelsea were unbeaten in their first 12 Premier League games but lost 1-2 at Wolves on Wednesday -- their second defeat in their past three league games. Those dropped points have left them in fourth place, 10 points adrift of leaders City after 15 games. "I knew very well that sooner or later we have to face difficulties," Sarri said on Friday. "When you change the way of playing, the way of football, you need to change the mentality.

"You need to change the mentality in 25 minds, so it's not a short way. It's very difficult."

Pep Guardiola's City have won 13 of their Premier League games and are unbeaten in the league since April.

Sarri, who has experienced defeat to Guardiola with Napoli and Chelsea in August's Community Shield, was asked how his side can beat City.

"I don't know," he said. "Against Guardiola I lost every match, so I don't know. You have to ask somebody else."

Maurizio Sarri accused his Chelsea players of a collective "blackout" at the first sign of trouble against Fulham, despite a 2-0 win, and against Wolves.

The Italian said: "We have a problem to manage the match at the moment. In the last two matches we played well for 55, 60 minutes, then (after) the first difficulty we suffered a blackout.

"In the first match (against Fulham) we were lucky because they didn't score. In the last match (at Wolves) we were a little bit unlucky. For the opponents, five shots, only two on target. We conceded two goals."

Sarri struggled to explain the reason for the lapses.

"It's not really very easy to answer," he said. "We didn't react as a team, as 11 players. In 11 different ways. So it's a big problem. We were not able to have the right determination to win the match."

City, who finished 30 points better off than Chelsea last season, are the best team in Europe, Sarri said, and that is his target for the Blues.

"At the moment they are stronger than us but our final target is to be the best team in Europe," he said. "We need to work, we need to improve. In 90 minutes anything can happen. We know it's very difficult but we have to believe in it.

Wolverhampton English Premier League Football
Get the latest updates on IND vs NZ 2021, check out the Schedule and Live Score . Like us on Facebook or follow us on Twitter for more sports updates. You can also download the NDTV Cricket app for Android or iOS.