Leaders Chelsea, who beat Tottenham 4-2 in the FA Cup semi-finals on Saturday, went seven points clear by beating Southampton on Tuesday, but Spurs' win trimmed the gap back to four points. 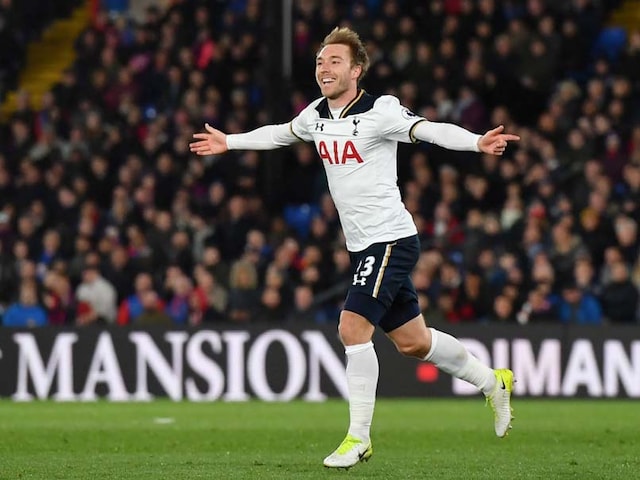 Leaders Chelsea, who beat Tottenham 4-2 in the FA Cup semi-finals on Saturday, went seven points clear by beating Southampton on Tuesday, but Spurs' win trimmed the gap back to four points.

"It was good to get the three points and be alive in the race for the title. The challenge is to keep going."

Eriksen struck in the 78th minute and Arsenal also left it late, Robert Huth's 85th-minute own goal giving Arsene Wenger's men a 1-0 win that left them four points off the Champions League places.

Palace had won six, drawn one and lost one of their previous eight league games and had the best of the first half against Spurs, Christian Benteke working Hugo Lloris and Andros Townsend firing over.

Palace lost Mamadou Sakho to a potentially serious injury in the 57th minute, the in-form centre-back, who is on loan from Liverpool, stretchered off after twisting his left knee.

"He has hyperextended the knee," said Palace manager Sam Allardyce, whose side remain 12th.

"It is certainly serious enough to keep him out for who knows how long. We won't know until we diagnose it, but if it is ligament (damage), it may be the end (of his loan spell)."

Dele Alli scored a glorious goal for Spurs at Selhurst Park last season, but he squandered a good chance shortly before the hour, volleying wide from Kyle Walker's right-wing cross.

Eriksen came to the rescue with 12 minutes to play, gathering Harry Kane's pass and arrowing a glorious shot into the bottom-left corner to secure an eighth successive league win.

Left-back Nacho Monreal proved decisive for the second time in four days as Arsenal snatched a late 1-0 victory over champions Leicester City at the Emirates Stadium on Wednesday.

With a largely sterile game drifting to a goalless draw, Monreal let fly with a shot that was arrowing wide before it struck Robert Huth and diverted past Kasper Schemichel for an own goal.

Monreal had volleyed in a fine equaliser in Arsenal's 2-1 FA Cup semi-final win over Manchester City at Wembley on Sunday.

His latest intervention took Arsene Wenger's Arsenal up to sixth place in the table, four points off the Champions League berths.

Leicester, meanwhile, are still not yet safe from relegation, despite their six-point cushion above the drop zone.

The goal triggered a lively and tetchy finish to a game that had previously meandered along at a soporific rhythm.

A series of contentious incidents included a 90th-minute clash between Christian Fuchs and Alexis Sanchez, who attempted to prevent the Leicester man from launching one of his trademark long throws.

Fuchs deliberately threw the ball at the Chilean's shoulder and Sanchez inexplicably threw himself to the ground holding his face.

It had seemed as though the Arsenal faithful were resigned to life outside the Champions League, judging by the swathes of empty seats at the Emirates. Each of the upper tiers was no more than two-thirds full.

The hosts' job was almost made harder after just seven minutes when Sanchez sloppily gave away possession just outside his own area.

Gradually, though, the game fell into the expected pattern of Arsenal possession against a packed Leicester defence.

Francis Coquelin tried his luck from distance in the 17th minute with a long-range effort that Leicester goalkeeper Schmeichel could only parry away after losing his footing.

Comments
Topics mentioned in this article
Arsenal Tottenham Hotspur Christian Eriksen English Premier League Football
Get the latest Cricket news, check out the India cricket schedule, Cricket live score . Like us on Facebook or follow us on Twitter for more sports updates. You can also download the NDTV Cricket app for Android or iOS.