Nemanja Matic's thunderous long-range effort sealed a final date for Chelsea against Arsenal or Manchester City, who meet in the second FA Cup semi-final on Sunday. 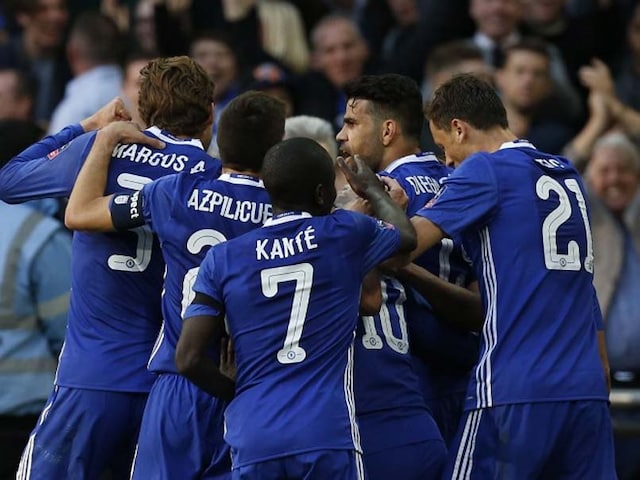 Chelsea players celebrate after Eden Hazard put his team back in front in the FA Cup semis.© AFP

Eden Hazard fired Chelsea into the FA Cup final as the Belgian's blistering strike ensured Antonio Conte's selection gamble paid off in his side's dramatic 4-2 win over Tottenham Hotspur on Saturday. Blues boss Conte sprang a major surprise by starting with Hazard and Diego Costa on the bench in the Wembley semi-final as he looked ahead to the Premier League leaders' vital fixture against Southampton on Tuesday. But Conte's bold moves proved inspired as Hazard's replacement Willian put Chelsea ahead early on and then restored their lead in the second half after Harry Kane's equaliser.

Dele Alli levelled again for Tottenham, but Conte had all the answers and, when he sent on Hazard, the Belgian blasted Chelsea back into the lead.

Nemanja Matic's thunderous long-range effort sealed a final date against Arsenal or Manchester City, who meet in the second semi-final on Sunday.

Having seen their lead at the top of the league cut to four points by second placed Tottenham last weekend and looking vulnerable following a limp defeat at Manchester United, this should be a huge psychological boost for Conte's men.

They rode their luck at times but showed a decisive killer instinct while their London rivals came up short in crunch time.

Tottenham, losers yet again at Wembley and still without an FA Cup final appearance since 1991, need an immediate response in their midweek trip to Crystal Palace if they are to get revenge by pipping Chelsea to the title.

Conte's decision to pick Willian and Michy Batshuayi instead of Hazard and Costa triggered a round of second guessing, but it took just five minutes for the former Juventus coach to be vindicated.

When the Spaniard was sent sprawling by Toby Alderweireld's lunge, Chelsea were hoping for a more severe punishment than the yellow card shown by referee Martin Atkinson.

But their frustration was short-lived as Willian stepped up to exact retribution from the free-kick, the Brazilian's superb 20-yard strike eluding Tottenham goalkeeper Hugo Lloris before nestling into the far corner.

Kane has been the spearhead of Tottenham's impressive run this season and the England striker's typically predatory finish drew them level in the 18th minute.

As Christian Eriksen prepared to whip over a cross, Kane was already on the move and his awareness gave him a valuable extra yard of space on Chelsea defender Nathan Ake as he stooped to guide a delicate header past Thibaut Courtois.

But, despite controlling possession for long periods, Pochettino's side still ended the half behind as his decision to play Son Heung-Min out of position at left wingback was exposed in the 43rd minute.

Kante slipped a pass to Victor Moses and when the Nigerian's surge into the penalty area was halted by Son's rash tackle Atkinson gave the penalty on the advice of his linesman.

Batshuayi wanted to take it, but Conte demanded Willian step up and he stroked home the spot-kick in confident style.

It could have been a major momentum changer, yet Tottenham were level again in the 52nd minute.

Barely looking up as he received the ball, Eriksen unfurled a majestic pass towards Alli, who timed his run perfectly to slide in front of Luiz and direct a close-range finish past Courtois.

Conte responded by sending for the cavalry as Costa and Hazard came on for Willian and Batshuayi in the 61st minute, while Cesc Fabregas was introduced soon after.

Once again, Conte's instincts were spot on and the Italian's changes brought the winner in the 75th minute.

Fabregas's corner was only partially cleared and Hazard seized the ball just inside the area before drilling a blistering finish beyond Lloris.

If that was a memorable strike, there was even better to come five minutes later when Hazard teed up Matic and Serb's thunderous 30-yard rocket sent Chelsea into raptures.

Comments
Topics mentioned in this article
Chelsea Tottenham Hotspur Eden Hazard Willian Nemanja Matic Football
Get the latest Cricket news, check out the India cricket schedule, Cricket live score . Like us on Facebook or follow us on Twitter for more sports updates. You can also download the NDTV Cricket app for Android or iOS.