Arsenal vs Leeds: Mikel Arteta said Pierre-Emerick Aubameyang set the tone for his teammates with his work ethic and quality performance. 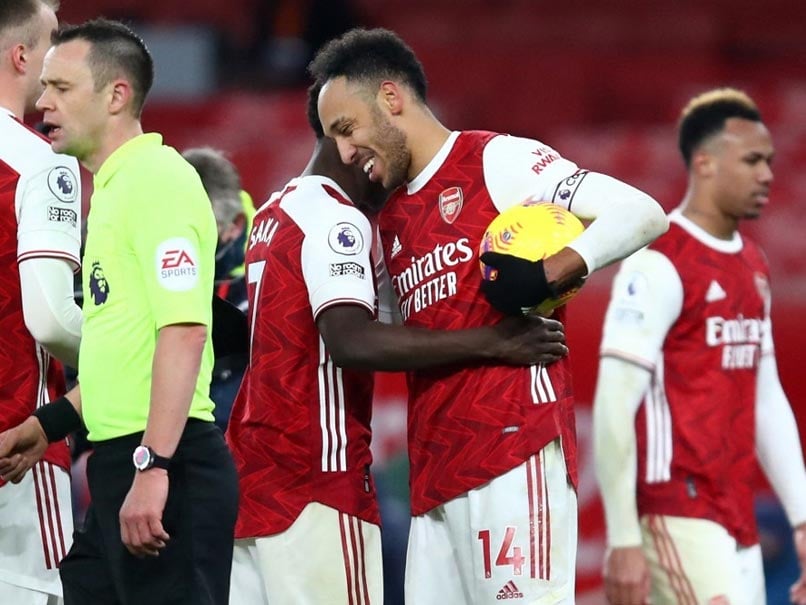 Pierre-Emerick Aubameyang with the match ball after his hat-trick against Leeds United.© AFP

Arsenal manager Mikel Arteta praised Pierre-Emerick Aubameyang for his match-winning performance against Leeds United and said the latter "set the tone for the team". Aubameyang scored his first Premier League hat-trick as Arsenal registered a comfortable 4-2 win over Leeds United here on Sunday. With this win, Arsenal ended their three-match winless run. "Yes, I thought he was superb today. He's been training really well in the last week or so, he was back to normal, he looked really committed in training, really hungry. I think today he had a great performance, not only for the goals but for the way he worked without the ball as well," the club's official website quoted Arteta as saying.

"The amount of pressure he put on every Leeds defender and he set the tone for the team. I'm delighted for him, he deserves it," Arteta said.

Aubameyang scored the opening goal of the match in the 13th minute before doubling Arsenal's lead in the 41st minute. Arsenal went 2-0 ahead from the penalty spot as Aubameyang sent Meslier the wrong way after the Leeds goalkeeper had fouled Bukayo Saka.

Four minutes later, Hector Bellerin netted a goal to put Arsenal in a commanding position. Aubameyang completed his treble two minutes after the break with a close-range header from Emile Smith Rowe's delivery.

Leeds United opened their account in the 58th minute through Pascal Struijk. Helder Costa then found the back of the net, taking the scoreline to 4-2.

Arteta also said that Aubameyang is a very difficult player to play against when he is firing.

"We know that a big part of our future success is related to Auba being at his best and scoring as many goals as possible. If he is in that kind of form we're going to be closer to winning football matches, that's clear. We can't just rely on him but he's a big piece of our parcel and you saw today again today, when he's firing he's a very difficult player to play against," he said.

Arsenal Leeds United Mikel Arteta Pierre-Emerick Aubameyang Football
Get the latest updates on ICC Women's Cricket World Cup 2022 and IPL 2022, check out the Schedule , Live Score and IPL Points Table. Like us on Facebook or follow us on Twitter for more sports updates. You can also download the NDTV Cricket app for Android or iOS.