Liverpool defeated Manchester United 4-2 to keep alive their hopes of a top-four finish but forward Sadio Mane's reaction towards manager Jurgen Klopp after the match stole the limelight for wrong reasons. 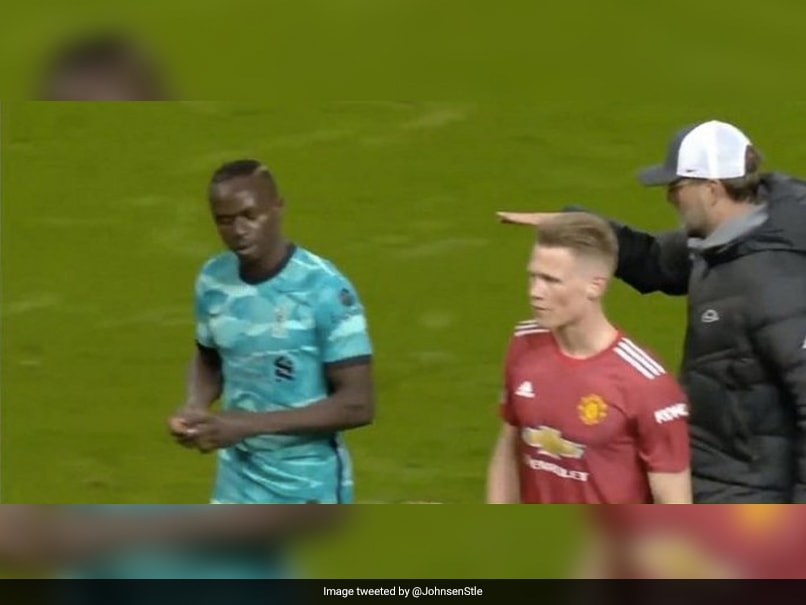 Sadio Mane wasn't happy with Jurgen Klopp's decision to put him on the bench.© Twitter

Liverpool registered a crucial 4-2 win over Manchester United to keep alive their hopes of sealing a Champions Leagueberth for the next season with a top four finish. Despite the win, Liverpool's star player Sadio Mane, who started off the bench, wasn't in a mood to celebrate and he even refused to shake hands with his manager Jurgen Klopp after the match. Klopp, however, downplayed the incident saying there was "no problem" between him and Mane. Klopp explained that he understood Mane's reaction because he had decided late in the training to drop Mane on the bench and start Diogo Jota and there wasn't any time to explain things to the Senegalese forward.

For the people that didn't see Mané's pathetic behaviour towards Klopp after the game... pic.twitter.com/12HnkKF9PR

"No, no problem. Yesterday I made a late decision in training to decide for Diogo (Jota). The boys are used to me explaining things usually but there was actually no time for that and that's all. It's all fine," Klopp said after the match.

After beating second-placed Manchester United away from home, Liverpool moved to fifth on the points table with 60 points after 35 matches and have a game in hand. This was Klopp's first win at Old Trafford as a Liverpool manager, and the German said it couldn't have come at a better time than this as his side badly needed this win.

"Great fight, good game, intense, as all derbies should be. Our first win at Old Trafford since I'm at Liverpool and good timing, I would say. We needed it, obviously. We fought hard for it and we deserved it," he added.

Speaking ahead of Sunday's trip to West Bromwich Albion, Klopp said he was not angry with Mane but would speak to the 29-year-old about the show of dissent.

"If somebody shows me five million times respect and one time not, what is then more important?" Klopp said on Friday.

"The world is in a situation when you make this one time bigger than necessary. That's unfortunately the case.

"If you had seen me as a player what I did out of emotion it was insane -- and I'm a completely normal guy, but it happened to me.

"We will talk about it, then it will be sorted. That's all."

The Liverpool boss does not expect any lingering fall-out from the incident as Liverpool try to secure a top four-finish in the Premier League.

"Do you want these things to happen? No," he said. "But it's not the first time in my life and I'm afraid to say it won't be the last time."

After failing to defend the Premier League title, Liverpool are trying to salvage a troubled season with Champions League qualification.

"Most of the time I've been in a chasing role so if I'm enjoying it, I don't know," said Klopp. "Sometimes yes, but I'm used to it.

"Usually, when I'm involved, seasons go to the wire. Playing Thursday, Sunday, Wednesday, Sunday is a tough one, but let's give it a try."

Liverpool need to win their all three remaining three games against West Bromwich Albion, Burnley and Crystal Palace over the next 10 days to guarantee a Champions League spot for a fifth consecutive season, at the expense of one of Chelsea or Leicester City.

Manchester United Sadio Mane Jurgen Klopp English Premier League Football
Get the latest updates on SA vs IND 2021-22, check out the Schedule and Live Score . Like us on Facebook or follow us on Twitter for more sports updates. You can also download the NDTV Cricket app for Android or iOS.