Liverpool kept their chances of a place in next season's Champions League in their own hands with a thrilling 4-2 victory over Manchester United at Old Trafford on Thursday. 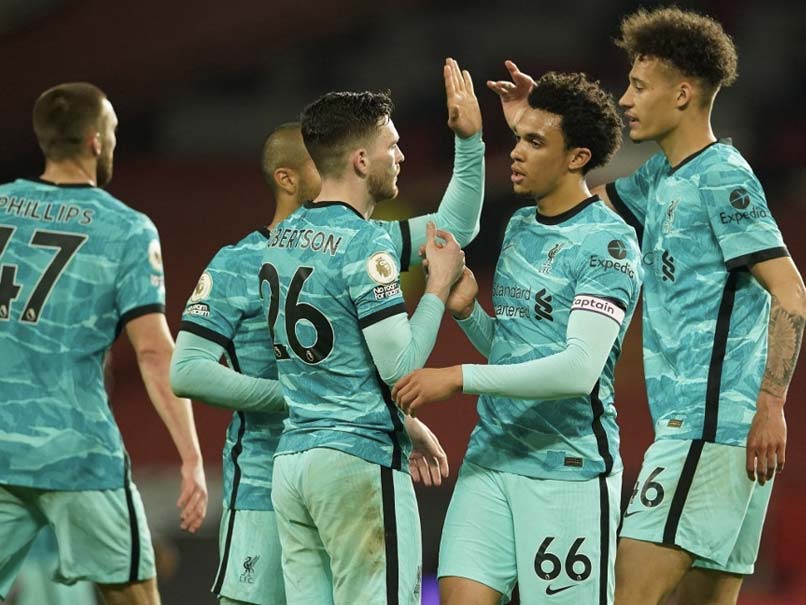 Liverpool came from behind to beat Manchester United 4-2 on Thursday.© AFP

Liverpool kept their chances of a place in next season's Champions League in their own hands with a thrilling 4-2 victory over Manchester Unitedat Old Trafford on Thursday. Jurgen Klopp's men still need to win their remaining three games to guarantee a place in the Premier League's top four, but cleared the biggest hurdle in their path with a first victory away to United since 2014. Roberto Firmino scored twice either side of half-time after Diogo Jota cancelled out Bruno Fernandes's early opener for the home side. Marcus Rashford's strike set up a grandstand finish, but Mohamed Salah secured a vital win in the final minute as Liverpool moved up to fifth in the table.

"It was necessary. Without this result we don't have to talk about it."

The clash between English football's two most successful clubs had been postponed 11 days ago as United fans rushed towards the pitch and clashed with police amid protests against the club's owners.

A peaceful protest took place before kick-off as supporters again voiced their anger at the Glazer family.

Distrust of the Americans has been reignited by United's part in a failed European Super League (ESL) project, that collapsed within 48 hours last month due to a backlash from fans, players, governments and governing bodies.

United and Liverpool were reportedly two of the leading drivers behind the project that sought to guarantee top level European football for 15 founder members every season without the need to qualify on the pitch.

Both clubs have struggled at times in the past decade to secure the riches of Champions League football via a top-four finish in the Premier League.

United's place in Europe's premier club competition next season is assured, although they failed to secure second spot behind Manchester City on Thursday.

Ole Gunnar Solskjaer made 10 changes from a 2-1 defeat to Leicester on Tuesday which sealed the title for City.

The Norwegian restored the majority of his regular starting line-up for United's fourth game in seven days, but the presence of Harry Maguire was badly missed with the United captain sidelined by an ankle injury.

"Of course you are going to miss him, but he's out and we've got to deal with that," said Solskjaer.

"They deserved the win. We conceded goals in key moments of the game. We created our own downfall."

In stark contrast to the cagey encounters between these two sides that have become the norm in recent seasons, the early goal sparked a wide open game with chances at either end.

Fernandes's shot was turned into his own net by Nat Phillips in his desperate attempt to clear on 10 minutes.

Phillips made amends for his earlier error in the equaliser as his shot was flicked in by Jota to equalise before Firmino bulleted home Trent Alexander-Arnold's free-kick to give Liverpool the lead in first-half stoppage time.

That was Firmino's first goal for 16 games and the Brazilian had another two minutes into the second-half with a tap in after Henderson could only spill Alexander-Arnold's shot.

But Liverpool's defensive problems that have beset their season reappeared in the final quarter.

Rashford halved United's deficit with an accurate finish from Edinson Cavani's through ball.

Moments later Phillips had to clear off his own line to deny Mason Greenwood an equaliser.

Salah finally eased Liverpool's nerves in the 90th minute as he sprinted clear to slot home his 30th goal of the season.

The Reds now need victories against West Brom, Burnley and Crystal Palace over the next 10 days to guarantee their place in the Champions League for a fifth consecutive season at the expense of one of Leicester and Chelsea.

The Foxes and the Champions League finalists face off in the Premier League on Tuesday, three days after they contest the FA Cup final at Wembley.

Manchester United English Premier League Football
Get the latest updates on ICC T20 Worldcup 2022 and CWG 2022 check out the Schedule, Live Score and Medals Tally. Like us on Facebook or follow us on Twitter for more sports updates. You can also download the NDTV Cricket app for Android or iOS.