Manchester City survived a late scare after Everton's shout for a penalty was waived away after a VAR review for a handball by midfielder Rodri. 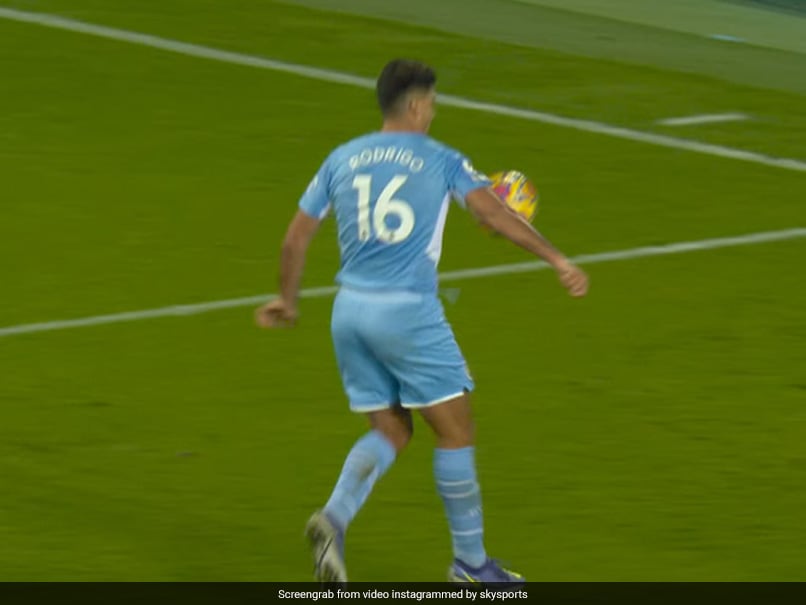 Defending champions and Premier League leaders Manchester City dodged a massive bullet on Saturday as they edged Everton 1-0 at Goodison Park. Phil Foden struck in the 82nd minute to give Manchester City all the three points, and, more importantly, open up a six-point gap over second-placed Liverpool, who play Chelsea in the League Cup final later on Sunday. City, however, survived a late scare after Everton's shout for a penalty was waived away after a VAR review for a handball by midfielder Rodri.

The incident sparked a massive debate on social media, with several current and former players suggesting that a penalty should have been awarded as the ball had struck the Spanish midfielder's hand.

Even former Manchester City defender Micah Richards replied in the affirmative on being asked whether it should have been a penalty for Everton.

Everton manager Frank Lampard was visibly livid at the decision after the final whistle, saying that even his three-year-old daughter "could tell you that's a penalty".

"I've got a three-year-old daughter at home who could tell you that's a penalty. It's incompetence at best, if it's not that, then someone needs to explain to me what it is," Lampard was quoted as saying by Sky Sports.

"The decision was incredible," said Lampard.

"A mistake is when you have done something wrong and don't have time to think about it. They had two minutes to digest the handball.

"Even if the VAR says not sure, then go have a look. It is incompetence at best, if not that then someone needs to explain what it is," Lampard added.

Liverpool English Premier League Football Frank Lampard Phil Foden
Get the latest updates on ICC T20 Worldcup 2022 and CWG 2022 check out the Schedule, Live Score and Medals Tally. Like us on Facebook or follow us on Twitter for more sports updates. You can also download the NDTV Cricket app for Android or iOS.