Marcos Alonso, Eden Hazard and Cesc Fabregas scored for Chelsea in their Premier League tie against Arsenal on Saturday. 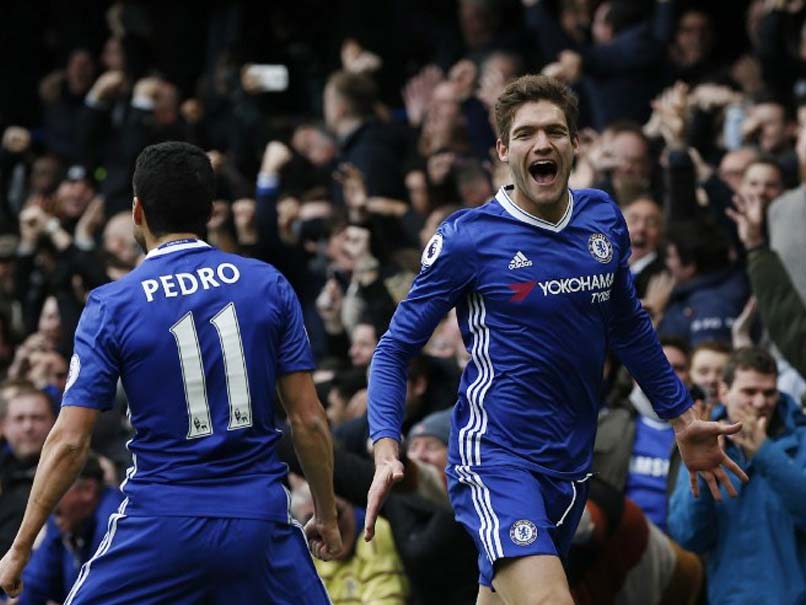 Marcos Alonso scored the opening goal for Chelsea against Arsenal on Saturday.© AFP

Eden Hazard's brilliant goal in Chelsea's 3-1 victory over Arsenal further buried the title hopes of their Premier League rivals with even angry Arsene Wenger admitting that his London foes are a class act.

Antonio Conte's side shattered Arsenal's hopes while Jurgen Klopp's Liverpool hit a new low in a 2-0 defeat at Hull in Saturday's games.

Belgian winger Hazard picked up the ball in his own half and waltzed past four opposing players to shoot home at Stamford Bridge after Marcos Alonso opened the scoring with a contentious effort, clattering into Arsenal's Hector Bellerin before heading home.

Cesc Fabregas rubbed salt into Arsenal's wounds in the 85th minute when the former Gunners midfielder chipped into the empty net after a woeful miskick from ex-Chelsea goalkeeper Petr Cech.

Olivier Giroud got a consolation but third placed Arsenal trail Chelsea by 12 points with 14 games remaining.

Chelsea have 16 wins in their last 18 league games, prompting Conte to hail the triumph as a significant moment in the title race.

"I consider Arsenal one of the six teams that can fight for the title. To put them 12 points behind is very important for us," Conte said.

Wenger fumed over Alonso's opener, saying: "It was 100 percent a foul. It was even dangerous play."

But he joined Manchester City's Pep Guardiola in saying Chelsea should have the title wrapped up.

"They look at the moment in full confidence, powerful, strong. They don't concede goals. It's for them to lose it."

Second placed Tottenham are Chelsea's closest challengers and their 1-0 victory against Middlesbrough meant they are still nine points behind.

When Son Heung-Min was fouled by Bernardo in the 58th minute at White Hart Lane, Tottenham striker Harry Kane stepped up to convert the penalty for his 16th goal of the season.

It was a first win in three league games for Mauricio Pochettino's team, who are unbeaten in their last nine.

"When you don't kill the game you leave it open. In the last second you can concede, that's the Premier League. Thankfully it didn't and we're happy," Pochettino said.

At the KCOM Stadium, Liverpool fell behind in the 44th minute when Alfred N'Diaye took advantage of goalkeeper Simon Mignolet's poor handling to bag a debut goal.

"Obviously that was not good enough. We gave both goals away easily and the overall performance was not like it should be," Klopp said.

"It makes no sense for us to play like this. We need to wake up, that was not acceptable."

Liverpool have won only once in their last 10 games in all competitions and will be knocked out of the top four if Manchester City avoid defeat against Swansea on Sunday.

Lamine Kone, signed by Palace chief Allardyce when he was in charge at Sunderland, swept home after Palace goalkeeper Wayne Hennessey dropped a 10th minute free-kick.

The Black Cats were two up in the 43rd minute through Didier Ndong's first goal for the club.

Jermain Defoe put the result beyond doubt with two goals in first half stoppage-time. One furious Palace fan ran onto the pitch to confront defender Damien Delaney.

Sunderland remain bottom of the table but they are level on points with Palace, who dropped to 19th place.

Ronald Koeman's side were ahead after just 31 seconds as Belgian forward Lukaku started his goal spree.

Everton doubled their advantage through James McCarthy in the 23rd minute and Lukaku notched his second six minutes later.

Bournemouth's Josh King set up a tense finale as he netted in the 59th and 70th minutes.

Lukaku struck again in the 83rd and 84th minutes to cap his memorable afternoon before Harry Arter's 90th minute reply and Ross Barkley's sixth for Everton.

West Ham bounced back from their mauling by Manchester City with a 3-1 win at Southampton thanks to goals from Andy Carroll, Pedro Obiang and Mark Noble.

Watford consigned 10-man Burnley to a seventh successive away league defeat with a 2-1 success at Vicarage Road.

Comments
Topics mentioned in this article
Arsenal Chelsea Hull City Tigers Sunderland Football English Premier League
Get the latest updates on ICC T20 Worldcup 2022 and CWG 2022 check out the Schedule, Live Score and Medals Tally. Like us on Facebook or follow us on Twitter for more sports updates. You can also download the NDTV Cricket app for Android or iOS.