Chelsea were punished for some dismal defending at Bramall Lane as David McGoldrick struck twice, either side of Oli McBurnie's goal. 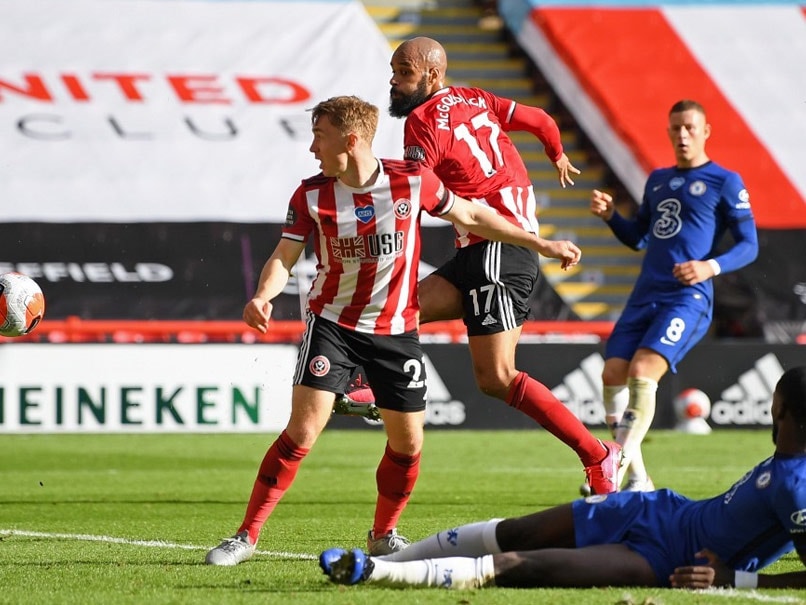 Chelsea remain third for now after a second defeat in their last four games.© AFP

Frank Lampard warned his Chelsea flops that he "won't forget" the lessons learned from their damaging 3-0 defeat at Sheffield United on Saturday. Lampard's side were punished for some dismal defending at Bramall Lane as David McGoldrick struck twice, either side of Oli McBurnie's goal. The Blues remain third after a second defeat in their last four games. They will be down to fifth by Monday evening if Leicester beat Bournemouth and Manchester United defeat Southampton. It was another alarmingly sloppy display from Chelsea, whose other loss since the restart was a defensively shambolic 3-2 loss at lowly West Ham.

Lampard was furious with his team's lack of desire and said: "They were better than us, physically, in the mind and with the ball. So you lose the game.

"They were stronger than us. You feel and hear every noise and all I could hear was Sheffield United voices. They are a good team. If you come here and perform below par this is what will happen.

"We were too slow and weren't getting our wingers into the game. We tried to get control, which we did but weren't threatening. At 2-0 down you make it difficult for yourselves.

"You analyse all season and review and move forward. I learned a lot and I won't forget that."

With games against Norwich, Liverpool and Wolves left in the league, Chelsea will hope second-placed Manchester City's two-year European ban is upheld on Monday.

In that case, finishing fifth would guarantee Champions League qualification.

The Blades are unbeaten in their last four games, with Chelsea their latest scalp after impressive wins over Tottenham and Wolves.

"I am not concerned about top four today. All I do is sit and watch the games and consider what we want to do. But today I am concerned with how we performed," Lampard said.

Chris Wilder's team are up to sixth and firmly in the hunt for  Europa League qualification in a remarkable first season back in the top flight.

Chelsea made a bright start and Ross Barkley tested Dean Henderson before Christian Pulisic headed over from Reece James' cross.

It was United who took the lead in the 18th minute as their high-tempo pressing force a naive mistake from Mason Mount.

The Chelsea youngster was caught as he tried to dribble out of his own penalty area and George Baldock crossed back into the box.

McBurnie met the delivery with a volley that deflected off Barkley, forcing Kepa Arrizabalaga into an awkward save that only pushed the ball out to McGoldrick and he slotted home from close range for his first Premier League goal.

Conceding such a messy goal knocked Chelsea out of their stride and the Blades doubled the lead in the 33rd minute after more sloppy defending from the visitors.

The fragility of Chelsea's defence has been their fatal flaw several times this season and they were prised open easily when McBurnie got in front of Kurt Zouma to meet Enda Stevens' cross with a powerful header past Kepa.

James' long-range effort forced a good save from Henderson, but the visibly frustrated Lampard replaced Mount and Andreas Christensen with Marcos Alonso and Antonio Rudiger at half-time.

McGoldrick put Chelsea out of their misery in the 77th minute.

He started the move on the halfway line and played a perfectly-weighted pass to Lys Mousset.

Mousset cut it back into the penalty area and when Rudiger made a complete hash of clearing, McGoldrick was on hand to blast into the roof of the net.

Chelsea Sheffield United Frank Lampard English Premier League Football
Get the latest updates on ICC T20 Worldcup 2022 and CWG 2022 check out the Schedule, Live Score and Medals Tally. Like us on Facebook or follow us on Twitter for more sports updates. You can also download the NDTV Cricket app for Android or iOS.