Second-placed Liverpool are level on points with leaders Everton, who have a superior goal difference and play their game in hand at Southampton on Sunday. 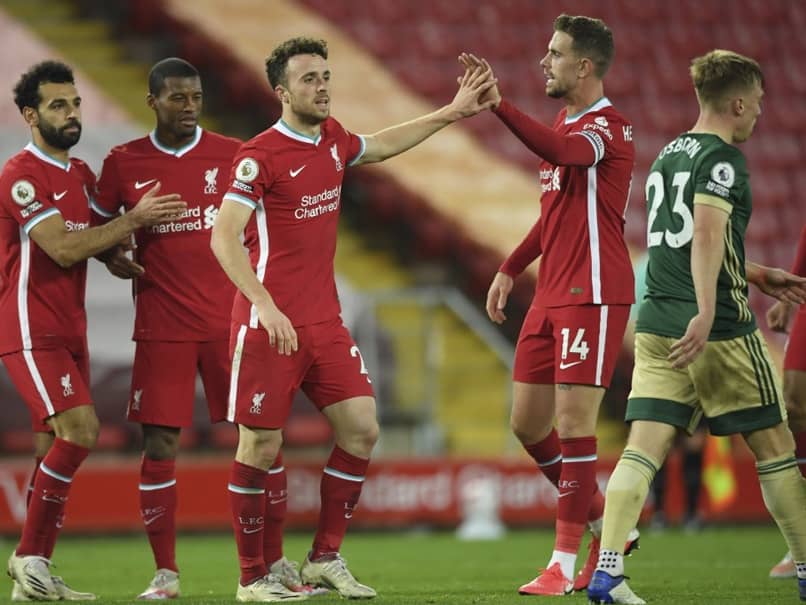 Jurgen Klopp praised Liverpool's ability to cope with "injustice" as the Premier League champions survived a scare to beat Sheffield United 2-1 on Saturday. Klopp's side trailed to Sander Berge's controversial first-half penalty at Anfield, with the Reds frustrated that VAR gave the spot-kick despite Fabinho's foul appearing to take place outside the area. But Roberto Firmino equalised before the break and Portugal forward Diogo Jota completed the escape act with his second goal since signing from Wolves in September. After losing Virgil van Dijk to a serious knee injury in last weekend's Merseyside derby draw at Everton, the Reds have proved they can survive without their influential Dutch centre-back.

"The penalty was not even a foul. During a season there are so many different periods, we have had an injustice and we have had to go again," Klopp said.

"I love these games. You have to work hard. You earn the easier games when it all goes your way on nights like this."

"We struggled with (Oli) McBurnie in the first half but we changed our positioning and won the second balls. We were dominating at 2-1 and had some really good football but then they came back," Klopp said.

"They never give up, I respect that so much. They go and go and go. Chris (Wilder, Sheffield United coach) is doing a wonderful job."

Second placed Liverpool are level on points with leaders Everton, who have a superior goal difference and play their game in hand at Southampton on Sunday.

Liverpool came out firing and almost went ahead inside the first minute when Sadio Mane flicked the ball past United keeper Aaron Ramsdale before John Egan hacked clear.

Trent Alexander-Arnold tried his luck with an audacious free-kick from the halfway line that Ramsdale had to tip over.

But despite that lively opening it was United who took a shock lead in the 13th minute.

When Fabinho tripped McBurnie right on the edge of the Liverpool area, Mike Dean gave a free-kick but VAR intervened to review the challenge and ruled it had taken place just inside the box.

It was the first Premier League penalty Liverpool had faced at Anfield in over two years and Norway midfielder Berge showed no nerves as he sent Alisson Becker the wrong way for his first goal of the season.

Alisson was back after missing the last four matches with a shoulder injury and Liverpool's keeper marked his return with an excellent save from Ben Osborn's volley as United pressed for a second goal.

Klopp had sent out an even more attacking line-up than usual, with Brazilian forward Firmino deployed in midfield behind a front three of Mane, Jota and Mohamed Salah.

It was Firmino who dragged Liverpool level in the 41st minute with his first goal of the season.

Mane met Jordan Henderson's cross with a powerful header that was parried out by Ramsdale and, with the keeper prone on the turf, Firmino slotted in the rebound from close-range.

United were inches away from regaining the lead soon after the interval when Berge headed down to George Baldock, whose deflected effort flashed just wide.

Salah thought he had scored Liverpool's second with a cool finish from Alexander-Arnold's pass, but the goal was correctly disallowed for offside by VAR.

Liverpool never look completely comfortable when the error-prone Adrian is deputising for Alisson and the Brazilian underlined why he was so badly missed with a superb save from Berge.

Everton Sheffield United Roberto Firmino Sadio Mane English Premier League Football
Get the latest updates on IPL 2021, IPL Points Table , IPL Schedule 2021 , live score . Like us on Facebook or follow us on Twitter for more sports updates. You can also download the NDTV Cricket app for Android or iOS.