Jurgen Klopp saluted Liverpool's fighting spirit as the Reds proved they can cope without Virgil van Dijk by grinding out a 1-0 win at Ajax in the opening game of their Champions League campaign on Wednesday. 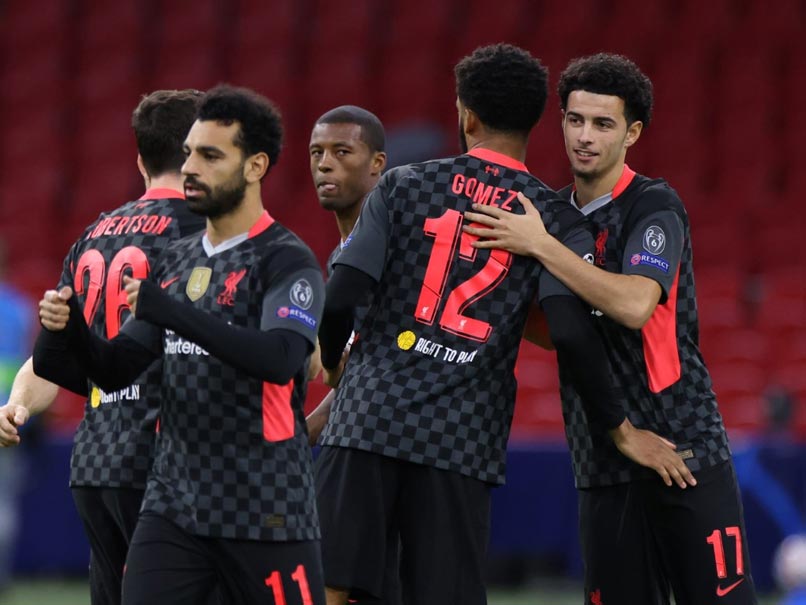 Liverpool edged past Ajax in their Champions League campaign opener on Wednesday.© AFP

Jurgen Kloppsaluted Liverpool's fighting spirit as the Reds proved they can cope without Virgil van Dijk by grinding out a 1-0 win at Ajax in the opening game of their Champions League campaign on Wednesday. Klopp's side are likely to be without Van Dijk for the rest of the season after the influential Dutch centre-back suffered anterior cruciate ligament damage against Everton last weekend. Critics have claimed Liverpool will struggle without Van Dijk, but Brazilian midfielder Fabinho filled in impressively alongside Joe Gomez at the heart of the defence.

While Liverpoolweren't at their best and rode their luck at times, never more so than when Nicolas Tagliafico diverted Sadio Mane's scuffed effort into his own net in the first half, it was an encouraging Group D opener for Klopp.

There was enough spirit about the 2019 Champions League winners to suggest they will use the Van Dijk blow to fuel their Premier League title defence and European challenge.

"It was not perfect but they fought brilliantly," Klopp said. "We did not take our chances, which was a shame, and Ajax had a big one which hit the post.

"When you're 1-0 up, these things can happen. But overall I'm happy with the game.

"It was not sunshine football but we wanted three points and we got it."

Van Dijk will need knee surgery after being pole-axed by Everton keeper Jordan Pickford's ugly foul and his injury came at a time when Liverpool looked vulnerable after losing 7-2 at Aston Villa before the international break.

Against that backdrop, keeping a clean-sheet for just the third time this season was a big lift for Liverpool, who won for the first time in three games despite also being without defender Joel Matip and midfielder Thiago Alcantara after the brutal Merseyside derby.

"I think both teams could play better football. At moments it was wild. The pitch was deep and muddy," Klopp said.

"Xherdan Shaqiri was lively and Takumi Minamino was unbelievable. He is like a machine. It helps when you can make five substitutions."

Praising Fabinho for an acrobatic goalline clearance, Klopp added: "I didn't know how it happened in the beginning. That's a good example of how the boys did today."

Liverpool's makeshift defence was easily carved open early on when Quincy Promes advanced down the left and found Dusan Tadic, who set up Ryan Gravenberch for a fierce strike that flashed just wide.

There was another major scare as David Neres' pass found the unmarked Promes six yards from goal, but he shot straight at Adrian to let Liverpool off the hook.

Making the most of that escape, Liverpool took the lead in bizarre fashion in the 35th minute.

Mane eluded Perr Schuurs as he broke into the Ajax area but when the Senegal forward went to shoot, he stubbed his foot into the turf, sending a miscued effort towards Tagliafico, who lost his balance and prodded the ball into his own net under no pressure.

Klopp has been fostering a siege mentality among his players since the Everton game and their backs to the wall spirit was on full display when Fabinho raced back to clear Tadic's lob off the line with a superb overhead kick.

Van Dijk couldn't have done it better himself, but while Fabinho was impressing, Ajax still carried a threat.

Taking aim from the edge of the area, Davy Klaassen smashed a fierce strike off the far post in the first minute of the second half.

Ajax went close again when Noussair Mazraoui took a Neres cutback and forced Adrian into a fine save.

Klopp took off Roberto Firmino, Mohamed Salah and Mane, with the latter needing ice on his right leg as he sat on the bench.

Jurgen Ekkelenkamp almost snatched a late equaliser after a mistake from Adrian, but Liverpool held their nerve to provide a morale-boosting start to life without Van Dijk.

Ajax Virgil Van Dijk Football
Get the latest updates on ICC T20 Worldcup 2022 and CWG 2022 check out the Schedule, Live Score and Medals Tally. Like us on Facebook or follow us on Twitter for more sports updates. You can also download the NDTV Cricket app for Android or iOS.