Liverpool defeated Arsenal 3-1 at home in the Premier League on Saturday evening. 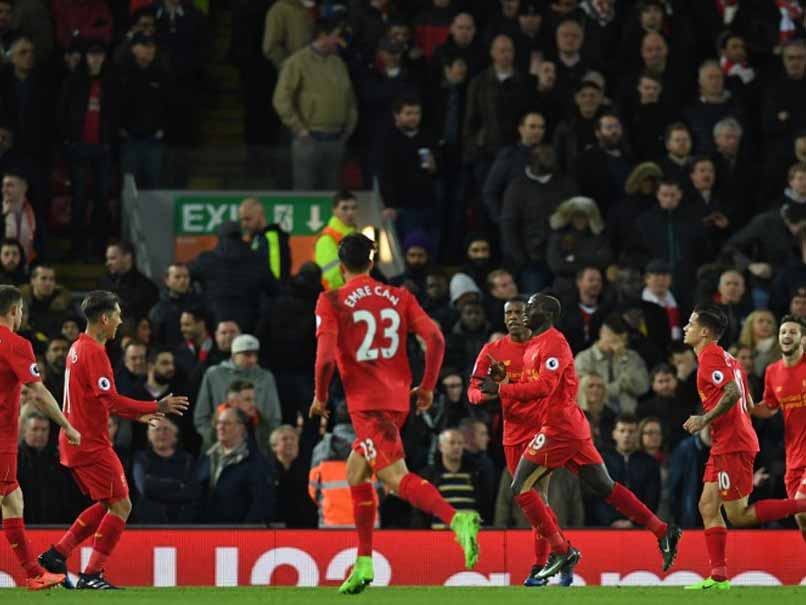 Liverpool came out with a brilliant performance to defeat Arsenal 3-1 at home on Saturday evening. Arsene Wenger's decision to leave Alexis Sanchez on the bench backfired as first half goals from Roberto Firmino and Sadio Mane set Liverpool on course for a vital 3-1 win. Wenger eventually brought on the Chilean international at half-time at Anfield and he set up Danny Welbeck for a goal that breathed life into Arsenal. But in the closely-fought contest for a top-four finish, this was a disappointing result for the Arsenal manager and Georginio Wijnaldum added Liverpool's third goal in stoppage-time to cap a wretched evening for the Gunners.

Arsenal drop below Liverpool to fifth place and sit two points outside the top four after a third defeat in their last four league games.

Faced with the daunting task of trying to overturn a 5-1 deficit against Bayern Munich in the Champions League last 16 second leg, Wenger knows the critics will be sharpening their knives again on Tuesday and he can't expect any sympathy after this bizarre selection gamble.

Liverpool, who climb to third place, took nine minutes to score the opening goal in an effort to maintain their record of not having lost to a team currently in the top half of the Premier League this season.

goals in Premier League matches against the Gunners for this man! pic.twitter.com/CKOChHcqVb

It was the home team's first notable chance as Mane crossed from the right and Philippe Coutinho dummied the ball to allow it into the path of Firmino at the far post.

The Brazilian appeared to have mis-controlled the ball, with Hector Bellerin closing him down just six yards out, but Firmino had the presence of mind to recover and deposit the ball into the roof of the Arsenal goal.

Alex Oxlade-Chamberlain had led a couple of early attacks with Bellerin sending over a dangerous cross from one of them which Joel Matip did well to defend at the expense of a corner.

But the second goal, five minutes before half-time, was an even better worked effort as Wijnaldum's pass from the left was moved on superbly by Firmino and Mane drove in an unstoppable finish.

Liverpool, with just two wins in 12 attempts in the calendar year before this meeting, looked anxious in defence.

Oxlade-Chamberlain's 21st minute chip to the far post caused one such moment of concern as Olivier Giroud rose with Mignolet who flapped at the ball before it went out for a corner.

An entertaining game continued in that fashion with Firmino fractionally offside as he readied himself to tear through on goal and Petr Cech being forced to tip Coutinho's 18-yard shot over the Arsenal bar after Wijnaldum's lay-off.

But as the half wore on, Liverpool's superiority began to tell and the visiting supporters greeted a wayward effort by Granit Xhaka with ironic cheers of "We've had a shot".

It was a close call, but you voted Adam Lallana as @carlsberg Man of the Match! pic.twitter.com/LLfYlAqdai

Francis Coquelin, who was enduring a miserable, error-strewn evening, became the game's first booking for a petulant tug on the shirt of Adam Lallana and Liverpool's second goal soon after left his team in even deeper trouble.

Coutinho could have added a third before the interval as Lallana's pass deflected into his path but he could only scoop his shot into Cech's arms.

Wenger predictably threw on Sanchez as a half-time substitute and the forward soon provided two dangerous left-wing crosses - one which Mignolet turned away and another which found Giroud whose header was turned over by the Liverpool keeper.

The momentum was now with Arsenal and, on 56 minutes, a brilliant pass by Sanchez threaded the ball between Nathaniel Clyne and Matip for Welbeck to chase into the area.

The England forward lifted an accomplished finish over Mignolet for his first league goal since the end of April.

Arsenal looked more capable than the first half but Liverpool responded well to conceding and could have extended their lead before eventually scoring a deserved third.

Comments
Topics mentioned in this article
Liverpool Arsenal English Premier League Football
Get the latest updates on India vs South Africa and check out  Schedule, Results and Live Score. Like us on Facebook or follow us on Twitter for more sports updates. You can also download the NDTV Cricket app for Android or iOS.