A day ahead of the EFL Cup final, a Manchester United fan took to Twitter to remind the official Liverpool account about the possibility of the Manchester club overtaking their major title haul 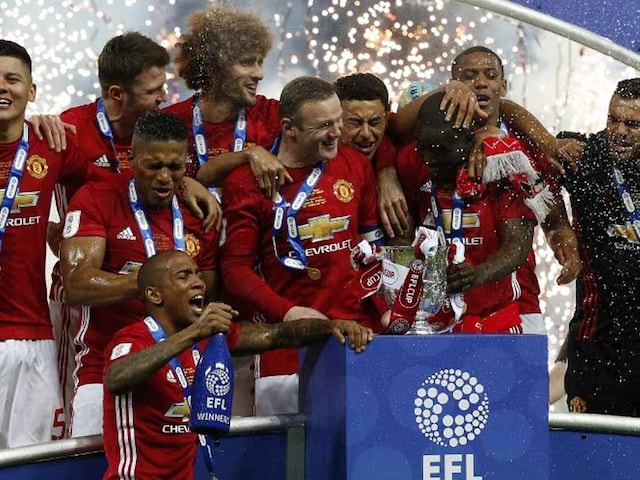 It was a glorious night for Manchester United at Wembley on Sunday as Jose Mourinho's side overcame Southampton by a score-line of 3-2 in a thrilling EFL Cup final to clinch their first major honour of the season. Having won the pre-season Community Shield, this was United's second trip to Wembley this season, and it was Zlatan Ibrahimovic who once again found the winner for the club. With the win, United also took their major trophy count to 42, surpassing bitter rivals Liverpool's record of 41 major honours.

While the League Cup triumph will undoubtedly boost the team's morale ahead of the season run-in, United will also revel in taking over from Liverpool as the most decorated club in the land.

A day ahead of the final, a United fan took to Twitter to remind the official Liverpool account about the possibility of the Manchester club overtaking their major title haul.

Liverpool's Twitter bio, at the time, described the club as 'England's most successful club with 41 major honours'.

Liverpool will have to change this Twitter Bio if Manchester United win the EFL Cup on Sunday pic.twitter.com/0BfHPvj9VN

A few hours after the tweet was sent, Liverpool promptly changed their Twitter bio, leaving the United fan euphoric.

I HAVE MADE LIVERPOOL FOOTBALL CLUB CHANGE THEIR BIO I CAN'T STOP LAUGHING pic.twitter.com/TFioXo65Jl

With Liverpool having shown great promise under Jurgen Klopp's management and United having struggled to win silverware in the post-Alex Ferguson era, the tables could turn in the future.

However, with Liverpool not consistently challenging for major honours in recent years, coupled with United's boundless financial resources, it is fair to say that the Merseyside club will have to go some distance before they can find themselves in an equal footing with United.

Comments
Topics mentioned in this article
Football Manchester United Liverpool Zlatan Ibrahimovic
Get the latest Cricket news, check out the India cricket schedule, Cricket live score . Like us on Facebook or follow us on Twitter for more sports updates. You can also download the NDTV Cricket app for Android or iOS.