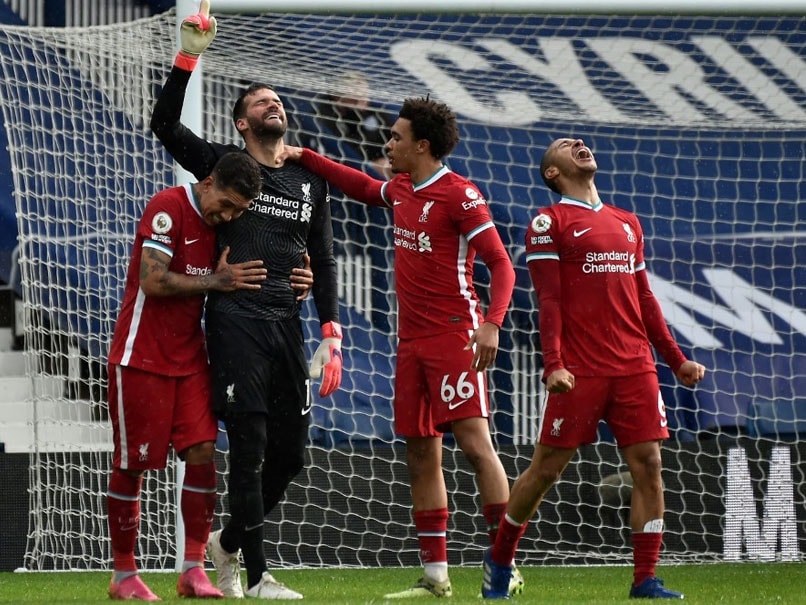 Liverpool's goalkeeper Alisson Becker scored a winner in the 95th minute against West Brom on Sunday to give his side a 2-1 victory in the Premier League. Becker's header off Trent Alexander-Arnold's corner in stoppage time helped last season's champions keep their Champions League hopes alive. Liverpool posted a video that showed Becker's stunning goal from several angles. "Football eh. Beautiful. Experience 5 minutes 33 seconds of unbridled joy with every angle of @Alissonbecker's goal..." wrote Liverpool in the caption to the video that captured emotions on both sides as West Brom players were left in disbelief.

Experience 5 minutes 33 seconds of unbridled joy with every angle of @Alissonbecker's goal... pic.twitter.com/QlgWJQ9QcA

With this victory Liverpool are now one point behind Chelsea, who are placed fourth, and three points behind third-placed Leicester City.

Wins against Burnley and Crystal Palace will ensure the Reds make the top four and qualify for the Champions League.

Brazilian Alisson Becker had lost his father in February and he was "too emotional" after the stupendous achievement.

"It's too emotional. For these past months for everything that happened to me, to my family, but football is my life," Alisson told Sky Sports.

"I play since I remember with my father. I hope he was here to see it, but I am sure he saw it with God on his side and is celebrating."

West Brom, who have already been relegated from the Premier League, were left cursing their luck.

Liverpool's away win against Manchester United on Thursday kept their Champions League fate in their own hands.

Liverpool are fifth on the table 36 points with a goal difference of 21. Table-toppers Manchester City have already won the league this season.

Liverpool Alisson English Premier League Football
Get the latest updates on IPL Auction 2023 and check out  IPL 2023 and Live Cricket Score. Like us on Facebook or follow us on Twitter for more sports updates. You can also download the NDTV Cricket app for Android or iOS.