England Cricket Trolls Virat Kohli After Edgbaston Victory, And It Has A Jonny Bairstow Reference

The Virat Kohli-Jonny Bairstow saga was a huge subplot in the rescheduled fifth Test between England and India. 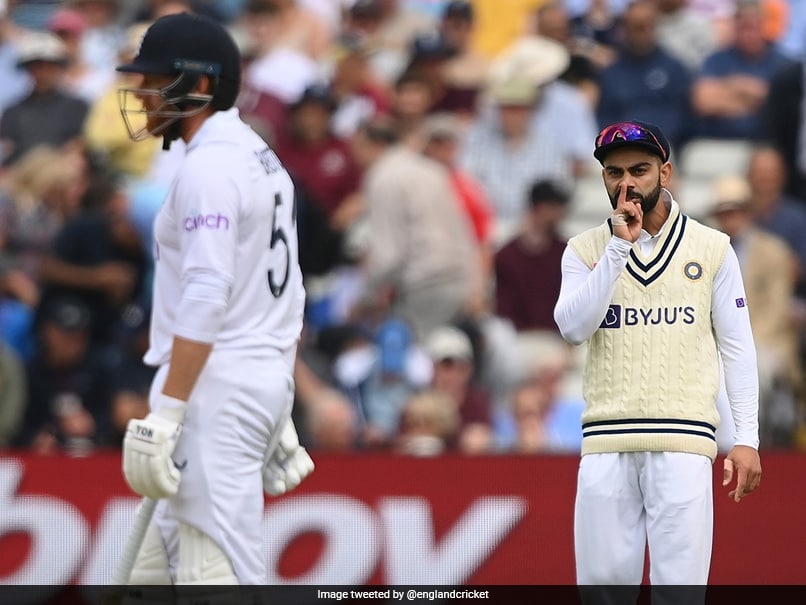 ENG vs IND: Virat Kohli and Jonny Bairstow were involved in a feisty exchange on Day 3.© Twitter

With a crushing defeat to England in the Edgbaston Test, the Indian cricket team has failed to seize the opportunity to register its fourth Test series win in the country. Jonny Bairstow and Joe Root, who have made chasing tricky targets in Test matches fashionable, put the famed Indian pace attack to sword with imposing hundreds as England recorded their highest ever chase of 378 runs with minimum fuss to level the five-match series 2-2. When England were rattled on the fourth afternoon by stand-in skipper Jasprit Bumrah, the two star batters didn't waver from their game plan. On the fifth day, England needed just under 20 overs to knock off the remaining 119 runs.

After the win, the England Cricket Twitter posted a cheeky Tweet, trolling Virat Kohli. There are two images placed side by side. The first one is of Kohli with his finger on the lips and Bairstow in the frame. The other one is of Kohli hugging Bairstow after the win.

The photos tell a story. The third day's proceedings in the Test match got off to a fiery start as Kohli and Bairstow were involved in a feisty exchange. The cameras caught Kohli first walking up to Bairstow signalling him to stand in his crease and the former India skipper was then seen making hand gestures. He was then seen gesturing Bairstow to stay quiet. After England captain Ben Stokes was then seen having a word with Kohli, the star India batter approached Bairstow with a big smile and gave him what looked like a friendly punch on the arm.

All those mind games, however, did not have any impact on Bairstow as he switched gears and hit 106 in the first innings and then an unbeaten 114 in the second to power England to a historic win.

Virat Kohli Cricket Social
Get the latest updates on India vs South Africa and check out  Schedule, Results and Live Score. Like us on Facebook or follow us on Twitter for more sports updates. You can also download the NDTV Cricket app for Android or iOS.